Syria and Iran have threatened to retaliate for an alleged Israeli air raid near the capital Damascus.

Syrian Ambassador to Lebanon Ali Abdul-Karim Ali says Damascus has "the option and the surprise to retaliate." He said he cannot predict when the retaliation will be, saying it is up to relevant authorities to prepare for it.

"Israel, the Americans and the Arab regimes that have conspired together know that Syria will defend its sovereignty and its land," he said. "The Zionist aggression exposes Israel's part in the war against Syria."

Ali further noted that the bombed center had been the target of repeated takeover attempts by rebels "and other terrorists."

Meanwhile, Syria summoned the head of a United Nations mission in the Golan Heights to protest against the air raid which Damascus said is a violation of a disengagement accord that followed the last major war between the two countries.

State media said Major General Iqbal Singha, head of the UNDOF peacekeeping force, was summoned to the Foreign Ministry where the protest was delivered.

In Iran, the semi-official Fars news agency quoted Deputy Foreign Minister Hossein Amir Abdollahian on Thursday as saying the raid on Syria will have significant implications for the Israeli city of Tel Aviv. 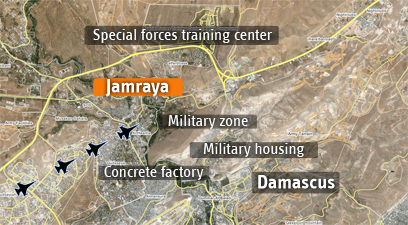 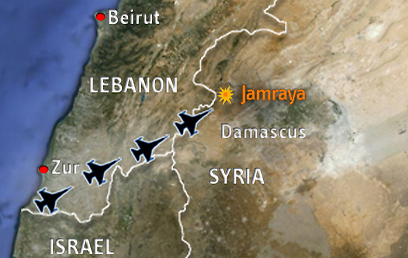 Iranian Foreign Minister Ali Akbar Salehi said, "There is no doubt that this aggression is consistent with the policy of the West and Zionists to overshadow the achievements of the Syrian people and government to bring stability and security in this country."

He condemned the "brutal aggression of the Zionist regime." Salehi also slammed the Syrian rebels remarking that they "align themselves with the Zionists' goals."

US officials said Israel launched a rare airstrike inside Syria on Wednesday, targeting a convoy believed to contain anti-aircraft weapons bound for Hezbollah. The Syrian military denied the existence of any such shipment and said a scientific research facility outside Damascus was hit.

Last week, Iran threatened that should Syria be attacked Tehran would retaliate as if the attack had been against Iran itself.

Meanwhile, high-ranking Israeli officials met with Indian security officials and warned them that Israeli diplomats could be targeted by Iranians on the anniversary of the terror attack against the Israeli embassy. The Times of India reported that security around Israeli institutions in the country has been boosted.

Roi Kais, AP and AFP contributed to this report