Obama's nominee for defense chief tells Senate panel all options must be on the table to prevent Iran from obtaining nukes. Republican panel member Inhofe: Hagel's record is deeply troubling and out of the mainstream

Chuck Hagel, named to be President Barack Obama's defense chief, on Thursday told a skeptical Senate panel considering his nomination that he backs US policy of preventing Iran from obtaining a nuclear weapon and supports a strong Israeli military.

Critics in Congress have sought to portray Hagel, a former Republican senator and decorated Vietnam war veteran, as a soft on Iran and anti-Israel, pointing to past comments that Hagel's supporters say were taken out of context or distorted.

Although most observers expect Hagel will eventually be confirmed, at least three Republican panel members, including James Inhofe, the party's leader on the Armed Services Committee, have said they did not support his nomination.

Before Hagel started speaking, Inhofe spelled out his objections. "Senator Hagel's record is deeply troubling and out of the mainstream. Too often it seems he is willing to subscribe to a worldwide view that is predicated on appeasing our adversaries while shunning our friends," said Inhofe. Hagel, speaking publicly for the first time since the attacks against his nomination began sought to set the record straight. "No one individual vote, quote, or statement defines me, my beliefs, or my record," Hagel said in testimony prepared for delivery at the hearing. "My overall world view has never changed: that America has and must maintain the strongest military in the world." 'My policy is one of prevention.' Hagel at Senate hearing (Photo: AFP)

Committee chairman Carl Levin said his concerns, especially over Hagel's past comments about unilateral sanctions on Iran, had been addressed. "Senator Hagel's reassurance to me ... that he supports the Obama administration's strong stance against Iran is significant," Levin said.

Another member of Obama's second-term national security team, Senator John Kerry, sailed through his nomination hearing before receiving the Senate's overwhelming support on Tuesday. But Hagel, who broke with his Republican party over the Iraq War, was expected to face a much more confrontational panel. Beyond tough questioning on Israel and Iran, he was also expected to be grilled on his view of the Pentagon budget - Hagel is known as an advocate for tighter spending controls. 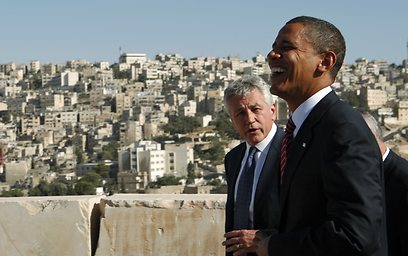 In the entire Senate, which would vote on Hagel if he is cleared by the committee, only one of the 45 Republicans - Mississippi's Thad Cochran - has said he backs Hagel.

Hagel, backed by the White House and Pentagon, has been on a charm offensive to win over recalcitrant senators since Obama nominated him this month to replace outgoing Defense Secretary Leon Panetta. Hagel held one-on-one meetings with 53 senators before his hearing. Susan Collins of Maine, a moderate Republican, said on Tuesday she had spoken with Hagel for 90 minutes and been satisfied on several issues, but stopped short of endorsing him. "We had a good discussion, but it's obvious that we have very different views on some fundamental issues," she said. Hagel also detailed his views in 112 pages of written responses to wide-ranging questions submitted by lawmakers. In them, he said that if confirmed as the next defense secretary, he would ensure that the military is prepared to strike Iran if necessary but stressed the need to be "cautious and certain" when contemplating the use of force. In his opening remarks, Hagel said all options must be on the table to prevent Iran from obtaining a nuclear weapon -language used to suggest the possibility of a nuclear strike. "My policy is one of prevention, and not one of containment," he said. Hagel, in his opening remarks and earlier responses to the panel, also voiced support for a steady US drawdown in Afghanistan, pledged to ensure equal treatment for women and homosexuals in the military and assured the committee that the United States would maintain an "unshakeable" commitment to Israel's security. "I will ensure our friend and ally Israel maintains its qualitative military edge in the region," he said. Most observers expect Hagel will be confirmed by the committee, even if he the vote breaks along party lines at 14 Democrats to 12 Republicans. Democrats control 55 seats in the full Senate and can approve Hagel with no Republican support, but they will need some backing from Hagel's party to overcome procedural hurdles that could stop the nomination. One has already emerged. Senator Lindsey Graham of South Carolina, a committee member, has threatened to keep the nomination from going to the Senate floor if Panetta does not testify about a September attack on the US diplomatic mission in Benghazi, Libya. Democratic Senator Carl Levin, the committee's chairman, said Panetta is already due to testify, and that would take place before the full Senate voted on Hagel.