FM Kozakou-Marcoullis informs visiting Palestinian counterpart Malki of 'important decision' to upgrade status of Palestinian mission to that of 'Embassy of the State of Palestine'; says Israeli construction in E1 zone would 'seriously undermine' peace prospects

Cyprus said on Friday it has upgraded its relations with the Palestinians to full diplomatic mission status, one of just eight European Union countries to do so.

The decision was announced by Foreign Minister Erato Kozakou-Marcoullis during an official visit by her Palestinian counterpart Riyad Malki.

"I informed my Palestinian counterpart of the decision of the government to upgrade the status of the Palestinian diplomatic representation in Cyprus from that of a Diplomatic Mission to that of an Embassy of the State of Palestine," Marcoullis told reporters.

She said this "important decision" was in line with the recognition of the "Palestinian state" in 1988 by Cyprus, and follows seven other EU members that have recognized a Palestinian State – Bulgaria, the Czech Republic, Hungary, Malta, Poland, Romania, and Slovakia.

A Cyprus Representation Office opened in Ramallah in the West Bank in 2009.

Malki said the decision sent a "very important message," adding: "We hope this courageous step taken by Cyprus will be taken by others in the European Union." 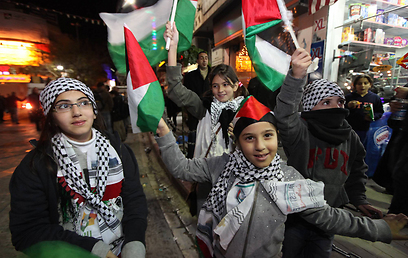 Palestinian Ambassador to Nicosia Walid Al-Hassan told AFP: "Now we have diplomatic representation in Cyprus like any other country in the world. This applies to our legal situation and the immunity which accompanies diplomatic status."

"All official correspondence will now be done in the name of the State of Palestine. Cyprus is the first European state to upgrade Palestinian status since the UN vote," Hassan said.

statehood and sovereignty and those of Israel for security, through a comprehensive negotiated peace based on a two-state solution.

Nicosia backs an enhanced EU role in efforts for renewed and substantial peace efforts in 2013.

Cyprus has expressed "deep dismay and strong opposition" at controversial Israeli settlement plans for an area near east Jerusalem known as E1.

"The E1 plan, if implemented, would seriously undermine the prospects of a negotiated resolution of the conflict," Marcoullis said.