Egyptian protesters clash with police after days of calm

Thousands of Egyptians marched and chanted against Islamist President Mohamed Morsi in cities across the country on Friday, scores of them assaulting the presidential palace with petrol bombs and rocks.

Fierce protests erupted late last month over what demonstrators saw as Morsi's attempts to monopolize power as well as wider political and economic grievances, but the unrest had calmed over the last week.

The main opposition alliance signed an agreement with the ruling Muslim Brotherhood last week rejecting violence and had not officially called for marches on Friday, although some of the alliance's younger members called for protests.

While the number of protesters has dwindled, distrust of Morsi and the Brotherhood and a sense of political and economic malaise have continued to bring people into the streets.

At least 59 people died in the demonstrations between Jan. 25, second anniversary of the uprising that toppled President Hosni Mubarak two years ago, and Feb. 4.

A few hundred protesters gathered outside the presidential palace in Cairo as night fell, throwing stones and homemade bombs at the main gate. Police fired into the air, shot teargas and drove cars toward the crowd to scatter them. "The people want to overthrow the regime," the protesters chanted, turning the trademark slogan of Arab Spring protests against the Islamist-led government it helped bring to power. At least 45 people were injured during the day across the country, medical sources at the health ministry said. 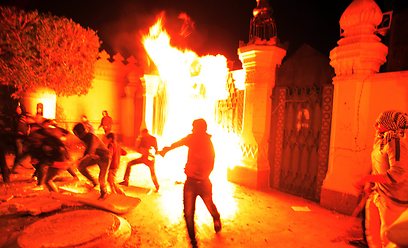 Two years after sweeping autocratic rulers from power, many in Egypt and Tunisia are angry over what they see as an attempt by Islamists to hijack their revolutions without improving their prospects for a better life.

In Tunisia, police and mourners clashed at the mass funeral of secular opposition leader Chokri Belaid, whose assassination on Wednesday plunged the country deeper into political crisis. Some of the most violent clashes on Friday were in the Nile Delta town of Tanta, hometown of an activist, 23-year-old Mohamed el-Gendi, who was buried there this week after being beaten to death by security men in Cairo. Television footage showed scores of protesters lobbing petrol bombs at riot police, who responded with teargas to scatter the demonstrators. "Down, down with the rule of the Supreme Guide," protesters chanted, referring to Mohamed Badie, leader of the Brotherhood, which has dominated Egypt's politics since the fall of Mubarak. In al-Mahalla al-Kubra, another delta town, protesters threw bombs and broke down the door of a city council building as they tried to break in, the state news agency MENA reported. Police fired teargas to disperse them. The Brotherhood's Freedom and Justice Party issued a statement on its Facebook page condemning "the attempts of some political forces in al-Mahalla al-Kubra to incite violence and destruction of public property". In Kafr el-Sheikh, dozens of protesters pelted police with rocks and tried to storm a government building to demand the removal of the provincial governor, MENA said. At a subway station near Tahrir Square, epicenter of the 18-day revolt that toppled Mubarak, demonstrators stopped trains by climbing onto the tracks, MENA reported.

In the town of El-Santa in Gharbiya province, protesters threw rocks at the offices of the Freedom and Justice Party, the Brotherhood's political party, MENA reported.