Strike on Gaza during Pillar of Defense (archives)
Photo: AFP

A US-based rights group said Israel violated laws of war in a series of airstrikes it conducted during Operation Pillar of Defense last November in the Gaza Strip against Hamas militants. Human Rights Watch (HWR) said it counted 14 airstrikes in which there didn't appear to be a valid military target, and four others targeting militants, but which used disproportionate force.

HRW said the attacks killed more than 40 Palestinian civilians. They included a bomb attack on a home in the northern Gaza Strip town of Jebalia that killed Fouad Hijazi, a 46-year-old janitor, and two of his children, ages 4 and 2. 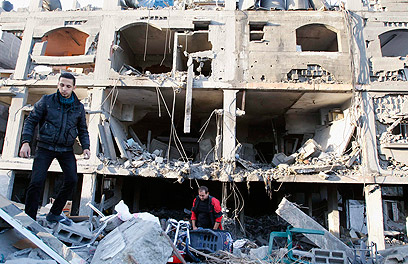 Aftermath of IAF strike in Gaza (Photo: Reuters)
An Israeli military spokeswoman said the army "established an inquiry board" headed by a major general to look into the eight-day operation, including incidents raised by HRW. She said the board's work hadn't yet been completed. "It is regrettable that the organization has opted to publish unverified claims," the spokeswoman said. She could not be identified, citing military policy.

Without any apparent military objective

In the past, Israel has blamed Hamas for civilian casualties, saying the group uses schools, mosques and residential areas for cover while carrying out attacks. But cases of mistaken identity or faulty intelligence have also been known to result in civilian casualties.

The HRW report said attacks included bombings of civilian locations like homes and farm groves, "without any apparent military objective."

That included a strike on November 21st that killed a 48-year-old farmer, Talal al-Asaly, and two of his children, Ayman, 19, and Abeer, 11, in northern Gaza while working in their garden. 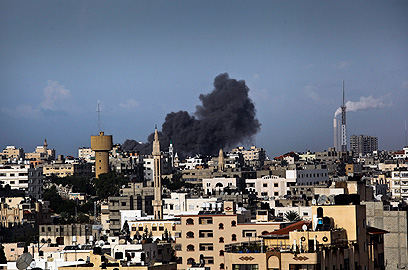 In each case, residents said they did not observe Palestinian militants trying to fire missiles nearby, the usual target of such Israeli strikes.

The report said other strikes appeared to have military targets but caused disproportionate harm to human life and property.

They cited an attack on November 20th may have targeted the home of a Palestinian militant, killing three civilians and wounding at least 20 others.

Another strike hit the home of a man that Israeli officials identified as a Hamas militant, killing 12 civilians.

The report comes after other criticisms of Israel's conduct during the military operation, including attacks on reporters working for Palestinian news outlets sympathetic to militants.

One attack killed two cameramen, another wounded seven media workers and a third strike on a media office inside a residential building killed a 2-year-old boy.