Op-ed: PM decided to dismiss Knesset Speaker Rivlin because he was 'disloyal,' too popular

Benjamin Netanyahu achieved an impressive political victory this week, one that negated all his political losses over the past few weeks – the blow he received in the elections; the failure to leave Lapid and Bennett behind; the surrender to their alliance; the dissolution of the alliance with the haredim and the looming intifada within Likud - he dismissed Knesset Speaker Reuven Rivlin.

Rivlin's dismissal is a historic milestone. Knesset speakers have been replaced in the past during regime changes, when they passed away or preferred other positions. Rivlin is in good health; his party, Likud, is still the ruling party; the position of Knesset speaker suits him and he enjoys it. Rivlin's great crime, for which there is no atonement, is that he caused people to like him.
Too Much Ego
Forced and divided government
Yakir Elkariv
Op-ed: Lapid and Bennett's constant talk of 'values' and 'essence' giving PM Netanyahu a big headache
Forced and divided government

Selecting a Knesset speaker is not an open game. It is a political move that is orchestrated form the top down. The prime minister informs his faction members who his leading candidate is; they accept the verdict and pass the name on to the other coalition partners, who are obligated to support the leading party's candidate in accordance with the coalition agreement.

A roll call vote is required to elect the Knesset speaker. There is no room for introducing another candidate or refusing to vote in favor of the ruling party's candidate. The newly-formed coalition cannot afford a failure.

Over the past few weeks Rivlin has repeatedly asked Netanyahu if he supports him for re-election as Knesset speaker. Netanyahu wondered why Rivlin had to ask. The support for him is known. On Saturday, when Rivlin found out Netanyahu was against his re-election, he felt deceived. The phone conversation between the two of them was very unpleasant. 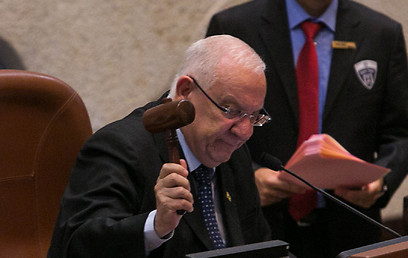 If the prime minister does not want Rivlin, Rivlin won't be there – even if the majority of Knesset members think otherwise. Rivlin, who knows the rules of the game better than anyone, is aware of his chances. He will not present his candidacy for the position and will not ask for a compensation prize. There is nothing like rage to fuel a politician's determination.

The Knesset has known more eloquent speakers than Rivlin. He is liked by the majority of the House not because of the political positions he sanctified, but because of his fair treatment of MKs from all factions, and because of his big heart.

Netanyahu, like any prime minister, wants a Knesset speaker who will be loyal to him personally – more than he is loyal to the Knesset. As far as he is concerned, Rivlin worshiped the wrong god. His wife Sara, as expected, added fuel to the fire. She sat in the gallery during celebratory Knesset sessions and made remarks against Rivlin's tolerance toward her husband's rivals.

Netanyahu suspected that in the current Knesset, which will elect the next president, Rivlin will be even more attentive to every MK and every faction. Instead of paralyzing the opposition, he will let it operate freely. Thwarting Rivlin's re-election as Knesset speaker is also aimed at thwarting his election as president. Netanyahu could have forgiven Rivlin for the crime of decency, but he could not forgive him for being loved. The story is about Netanyahu, not Rivlin. Something bad has happened to the prime minister since a dimwitted editor at Time Magazine hailed him as "King Bibi." It seems the only person who took the title seriously was Netanyahu himself. He surrounded himself and his family with regal etiquette. His political senses have been dulled. He blamed the media for all of his troubles – real or imaginary. And he became envious, on a Shakespearean scale. He attributed the success of the new, younger politicians to a plot by the media – mostly a plot by one specific newspaper. He also attributed the fondness for veteran politicians such as Rivlin to a plot by the media against him. His jealousy is incurable.