US official: 'Israel must show Arab public it's serious about peace'

In press briefing ahead of US President Obama's visit to Israel, Deputy National Security Advisor Ben Rhodes says trip is not about 'closing the deal' but about cooperation on day-to-day basis

WASHINGTON – US President Barack Obama will not be bringing a peace plan to Israel, but he will try to convince Prime Minister Benjamin Netanyahu and the Israeli public that after the Arab Spring, Israel cannot depend on autocrats holding everything together in the region.

The US believes that Israel must show it is serious about its peace efforts. It must convince the general Arab public, if nothing more than to maintain Israel's peace treaty with Egypt.

"I think we’ve been very clear with the Egyptian government, the democratically elected government in Egypt, that they need to uphold their responsibilities, including their international agreements, which obviously include the peace treaty with Israel," Deputy National Security Advisor for Strategic Communications Ben Rhodes said in a press briefing on Thursday night. 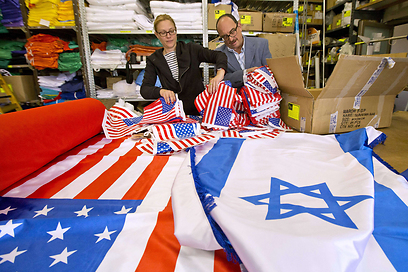 Getting ready for Obama's visit

"Thus far they have done that. I think there’s an opportunity, frankly, for there to be a deeper source of support for peace broadly across the region if there can be progress," Rhodes added.

"Part of the reason to move forward in the pursuit of peace is to signal to the people of the region a seriousness and a common sense of purpose so that the issue does not just continue to be a divisive one in the region, but rather people can have a sense of hope in Israel and in the Arab world that peace is possible.

"So that’s the type of dynamic we want to support, one in which people have a sense of possibility rather than a sense that this is going to be a continued source of division," the senior US official noted.

"We’ve been very clear that this visit is not about trying to lay down a new initiative or complete our work on a particular issue; that, frankly, there’s value in traveling precisely at a time when there is a new government in Israel and a new government in the United States and just having a broad strategic conversation.

"With a new government, you don’t expect, again, to close the deal on any one major initiative. But you, on the other hand, want to begin a broad conversation about all these issues where we’re cooperating on a day-to-day basis.

"And there are obviously going to be significant decisions in the months and years ahead about Iran, about Syria, about Israeli-Palestinian peace.

"And so by having this opportunity to speak with Israeli leaders, it can frame those decisions that ultimately will come down the line. And that’s the way in which the President is approaching the trip," Rhodes stated.

The White House has stressed that this is "a very important trip for the President. It’s his first trip to Israel since becoming President, and the first foreign trip of his second term in office. We felt like this was an important opportunity for the President to go to the region."

Rhodes noted that the US government "obviously cooperates very closely with Israel on security, intelligence and economic issues.

"There will be a broad agenda for our governments to address while the President is in Israel, including our efforts to prevent Iran from getting a nuclear weapon, the ongoing situation in Syria, the developments in the wider region that pose both opportunities and security challenges, and efforts to advance Israeli-Palestinian peace among the agenda."