Protesting for Pollard in Jerusalem: 'Obama, save him'

More than 2,000 people, mostly youths, call for release of spy for Israel currently serving 28th year in US jail; Ramallah residents demonstrate against US president's schedule visit to city

US President Barack Obama has already rejected the possibility he would order the release of convicted spy for Israel Jonathan Pollard, but the issue has reemerged ahead of the president's arrival in Israel.

Some 2,000 people, mostly youths, held a rally Tuesday evening in front of the President's Residence in Jerusalem demanding the release of Pollard, who is now nearing his 29th year in an American prison.

"Mr. President, save Pollard," one of the signs in the Jerusalem protest read. The four handed Israeli President Shimon Peres a letter signed by more than 200,000 Israelis, calling for the American president to set Pollard free. Since Obama's visit was announced the campaign for Pollard’s freedom has renewed its effort to pressure the US president to act on the issue, but as of yet, to no avail. During an interview to Channel 2 last week, Obama commented on the issue, saying that Pollard had committed a serious crime and as a result is serving his legally mandated sentence. "There is a justice system that allows for periodic review (of his sentence) and the potential for him ultimately being released," does exist, Obama said.
Welcoming Obama (Video: US Embassy)
X

"The way I, as president, function here is to try to make sure that I'm following the basic procedures and rules.

"I have no plans for releasing Jonathan Pollard immediately… but what I am going to be doing is to make sure that he – like every other American who has been sentenced – is accorded the same kinds of review and same examination of the equities that any other individual would provide," the American leader said. Two weeks ago, Prime Minister Benjamin Netanyahu met with Pollard's wife and told her: "It is time for Jonathan to be released. I will bring this issue up during President Obama's visit." Last April, President Shimon Peres sent an official letter to the White House requesting that it pardon Pollard on humanitarian grounds, citing the spy's deteriorating health. 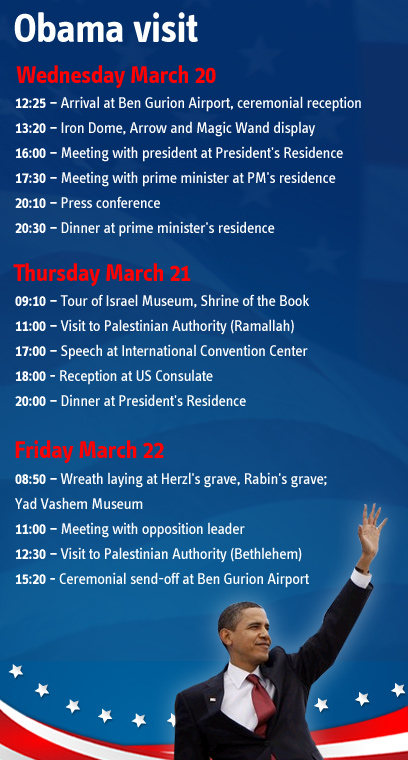 The White House, however, rejected the request. "Our position has not changed in this case," National Security Council Spokesperson Tommy Vietor said in response to the letter.

Last July, then-US Secretary of State Hillary Clinton said that she did not expect the administration to change its position on the matter.

Also on Tuesday, dozens of Palestinians protested in Ramallah's central square against Obama's scheduled visit to the city. The protesters held signs denouncing the US president and some even stomped on signs bearing his likeness.

The Palestinians protested the president's reluctance to deviate from the traditional US view in regards to Israeli-Palestinian relations, and denounced the US's constant use of its vetoing rights in the UN to block pro-Palestinian motions.

Roi Mandel and Elior Levy contributed to this report