US President Obama arrives in Israel

'Good to see you my friend' with Peres
Photo: Reuters

Obama: It's good to be in Israel again

After weeks of diplomatic and logistical preparations, US President Barack Obama landed in Israel on Wednesday for his first visit to the country as president. Obama arrived on Air Force One at Ben Gurion International Airport shortly after 12 pm.

He was welcomed at the airport by President Shimon Peres and Prime Minister Benjamin Netanyahu. The US president was all smiles as he embraced Netanyhu and Peres, thanking them for the welcome.

"A world without America's leadership, without her moral voice, would be a darker world. A world without your friendship, would invite aggression against Israel."

Peres added: "From the depths of our hearts, 'toda raba'. Thank you Mr. President, thank you for what you do." He ended his speech by saying: "Welcome home, Mr. President." Netanyahu also spoke at the welcoming ceremony, at Ben Gurion International Airport: "You've chosen to come to Israel as the first foreign visit of your second term..."Thank you for standing by Israel at this time of historic change." There was also some lightheartedness during the prime minister's speech. Addressing comments made by Obama in an interview earlier in the week to Israel's Channel 2 news, in which the US president said he wished he could put on a diguise and wander through Tel Aviv, Netanyahu told the US president that he had prepared a list of possible bars in Tel Aviv, should Obama choose to escape his security detail.

President Obama responded to the warm welcome, saying: "To the people of Israel thank you for this incredibly warm welcome," he then added in Hebrew: "It's good to be in Israel again."

I’m so honored to be here as you prepare to celebrate the 65th anniversary of a free and independent State of Israel. Yet I know that in stepping foot on this land, I walk with you on the historic homeland of the Jewish people. 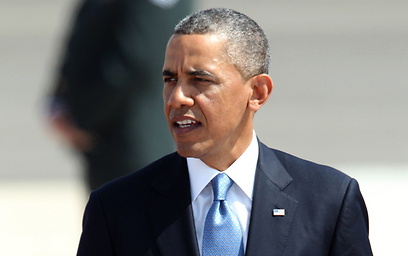 More than 3,000 years ago, the Jewish people lived here, tended the land here, prayed to God here. And after centuries of exile and persecution, unparalleled in the history of man, the founding of the Jewish State of Israel was a rebirth, a redemption unlike any in history.

Today, the sons of Abraham and the daughters of Sarah are fulfilling the dream of the ages -- to be "masters of their own fate" in "their own sovereign state." And just as we have for these past 65 years, the United States is proud to stand with you as your strongest ally and your greatest friend.

As I begin my second term as President, Israel is the first stop on my first foreign trip. This is no accident. Across this region the winds of change bring both promise and peril.

"So I see this visit as an opportunity to reaffirm the unbreakable bonds between our nations, to restate America’s unwavering commitment to Israel’s security, and to speak directly to the people of Israel and to your neighbors," Obama said at the welcoming ceremony .

"I am confident in declaring that our alliance is eternal, is forever," he added. After the ceremonial reception, Netanyahu accompanied Obama to an Iron Dome battery which was brought to the airport especially for the presidential visit. There the US president met former Defense Minister Amir Peretz who was a key figure in approving the missile defense system. He also met the young soldiers responsible for operating the system. Gantz showed Obama the ins and outs of the missile defense system with one commander explaining: "This is the battery that defended Tel Aviv during the last conflict." The president expressed interest in the Iron Dome system and asked about the statistical data and interception success rate.

Obama then asked how large the human element was in contrast to the technological perspective. When the president asked about recent reports of problems with the Iron Dome's interception data, the air force commander replied: "They're (the reports) rubbish."

When instructed to follow the red lines marked along the tarmac, Obama jokingly referred to Prime Minister Benjamin Netanyahu: "He's always talking about red lines." There was more joking with Obama telling Netanyahu that he was "getting away from Congress," on his visit. Casual: President and PM at airport

Obama then boarded the Marine One helicopter for the short trip to Jerusalem. Later on Wednesday, he is expected to meet with Peres at his official residence and have dinner with Netanyahu.

On Thursday, the visiting president will spend most of the day in the Palestinian Authority, before returning to Jerusalem where he is expected to speak before students at the International Convention Center. Then it's back to the Presidential Residence for the official celebratory dinner with President Peres.

Friday's itinerary includes a visit to Yad Vashem and laying a wreath at former Prime Minister Yitzhak Rabin's gravesite. A new addition to the itinerary is a meeting with Opposition Leader Shelly Yachimovich, after which Obama will head to Bethlehem for a visit to the Church of the Nativity, before returning to Ben Gurion Airport for a ceremonial send off.