WASHINGTON - The US Central Intelligence Agency has been feeding information to select rebel fighters in Syria to try to make them more effective against government troops, The Wall Street Journal reported on Saturday.

Citing unnamed current and former US officials, the newspaper said the new CIA effort reflected a change in the administration's approach that aims to strengthen secular rebel fighters.

The CIA has sent officers to Turkey to help vet rebels who receive arms shipments from Gulf allies, the report said.

But administration officials cited concerns about some weapons going to Islamists, the paper noted.

In Iraq, the CIA has been directed by the White House to work with elite counterterrorism units to help the Iraqis counter the flow of al-Qaeda-linked fighters across the border with Syria, The Journal said. 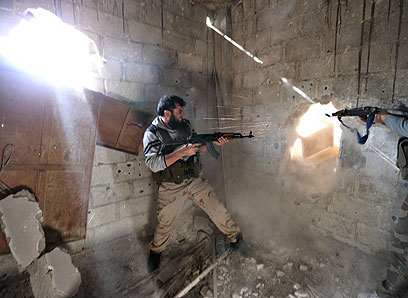 According to the report, the West favors fighters aligned with the Free Syrian Army, which supports the Syrian Opposition Coalition political group.

Syrian opposition commanders said the CIA had been working with British, French and Jordanian intelligence services to train rebels in the use of various kinds of weapons, the paper said. The move comes as the al Nusra Front, the main al-Qaeda-linked group operating in Syria, is deepening its ties to the terrorist organization's central leadership in Pakistan, The Journal said.

The new aid to rebels doesn't change the US decision against taking direct military action, the paper noted.

Meanwhile, senior members of the Democratic and Republican parties are urging President Barack Obama to get tougher on Syria, including considering "limited military options," such as air strikes, working with Turkish forces and boosting aid to Syrian opposition groups.

According the Huffington Post, Sens. John McCain (R-Ariz.) and Carl Levin (D-Mich.) wrote to the president Thursday to say they are especially alarmed about reports that chemical weapons have been used in Syria against civilians.

"We write to express our strong belief that it is in our national security interest to take more active steps, together with our friends and allies in the Middle East and Europe, to stop the killing in Syria and force Bashar al-Assad to give up power," the senators wrote.

"The longer the conflict in Syria goes on, the worse its consequences are becoming. The potential use of chemical weapons only makes the case for greater action more compelling and urgent," they argued.

The senators urged Obama to consider using the US military.

"We believe there are credible options at your disposal, including limited military options, that would require neither putting US troops on the ground nor acting unilaterally," the letter read.