North Korea's official KCNA news service said on Tuesday that the country will restart all nuclear facilities, including its shuttered Yongbyon nuclear reactor.

It will rebuild and restart nuclear facilities including its mothballed uranium enrichment facility and the 5 MW Yongbyon reactor, which it closed in 2007, KCNA quoted a spokesman at North Korea's atomic energy agency as saying.

It said the nuclear facilities would be used for both electricity and military uses. 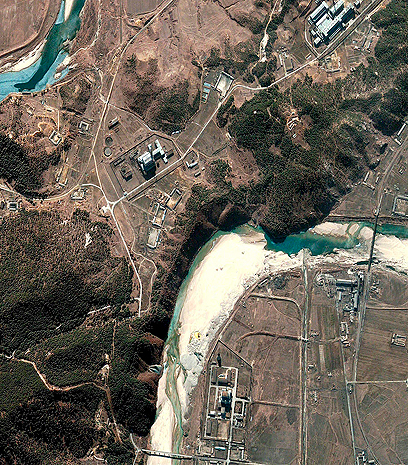 Prior to the announcement, North Korea's leader appeared to tamp down hostile rhetoric that had threatened impending war with the United States and South Korea in a key speech published on Tuesday that implied the isolated country was shifting its focus to development.

Pyongyang has launched relentless verbal attacks and threats against the United States and South Korea since new UN sanctions punishing it for its February nuclear test were adopted and during military drills by the South and US forces.

But the speech delivered on Sunday by Kim Jong-un focused on how nuclear capability supported economic development although it accused the United States of seeking to drag North Korea into an arms race in a bid to hinder its economic improvement. "It is on the basis of a strong nuclear strength that peace and prosperity can exist and so can the happiness of people's lives," Kim said in the speech delivered to the central committee meeting of the ruling Workers Party of Korea and published in full on Tuesday.

Threats from North Korea have prompted the United States to beef up its forces on the peninsula and station a warship off the Korean peninsula overnight.

North Korea had cut off hotlines between it, the United States, South Korea and the United Nations and threatened to close a joint economic zone it runs with the South. It put its missile forces on full alert and threatened US bases in the Pacific and on the mainland.

The North has promised its citizens that it would become a strong and prosperous nation and is moving towards celebrations of the April 15 birthday of its founder Kim Il-sung, the grandfather of the current leader.

"The fact that this was made at the Party central committee meeting, which is the highest policy setting organ, indicates an attempt to highlight economic problems and shift the focus from security to the economy," said Yang Moo-jin of University of North Korean Studies in Seoul.

The 30-year old Kim, who took office in December 2011, said that no nuclear state had been invaded in modern history and that "the greater the nuclear attack capability, the greater the strength of the deterrent against an invasion."

"Our nuclear strength is a reliable war deterrent and a guarantee to protect our sovereignty," he said.