The Syrian government is sending members of its irregular militias for guerrilla combat training at a secret base in Iran, in a move to bolster its armed forces drained by two years of fighting and defections, fighters and activists said.

The discreet program has been described as an open secret in some areas loyal to President Bashar Assad, who is trying to crush a revolt against his family's four-decade hold on power.

Reuters interviewed four fighters who said they were taken on the combat course in Iran, as well as opposition sources who said they had also been documenting such cases.

Israel's intelligence chief and a Western diplomat have said Iran, Assad's main backer, is helping to train at least 50,000 militiamen and aims to increase the force to 100,000 - though they did not say where the training occurred.

No one at Iran's foreign ministry was available for comment, but Iranian officials have repeatedly denied military involvement in the Syrian conflict, saying they have only provided humanitarian aid and political support for Assad.

A Syrian government security source, who declined to be named, denied that Syria was sending fighters to Iran. "We train our own special forces for this type of combat," he said. "Since 2006 we have had units trained in guerrilla warfare, why would we need to send people to Iran?"

But if the reports by Syrian fighters are true, the move to train combatants in Iran suggests that their country's increasingly regionalized conflict has grown well beyond - and could even outlast - a battle for power between Assad's circle and the opposition.

The fighters also appear to come largely from minority groups that have supported Assad against the mostly Sunni Muslim-led uprising. Such a move could exacerbate the dangerous sectarian dimensions of a conflict that has turned into a civil war that has cost the lives of more than 70,000 people.

Iran, a Shiite rival to Sunni countries in the Gulf that support the rebels, sees Syria as the lynchpin of its regional influence. Syria has been its conduit to the Lebanese terrorist movement Hezbollah, which fought a war with Israel in 2006.

"It was an urban warfare course that lasted 15 days. The trainers said it's the same course Hezbollah operatives normally do," said Samer, a Christian member of a pro-Assad militia fighting in rural parts of Homs province in central Syria.

"The course teaches you the important elements of guerrilla warfare, like several different ways to carry a rifle and shoot, and the best methods to prepare against surprise attacks."

According to fighters interviewed in Homs, most men sent to undergo the training are from the Alawite sect, the heterodox strain of Shiite Islam of which Assad himself is a member. 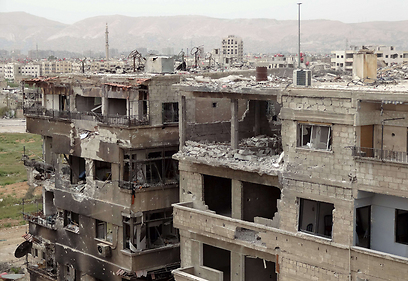 A smaller number were Druze and Christians, whose communities are divided but largely support Assad due to their fears of rising Islamist rhetoric among the opposition.

"The Iranians kept telling us that this war is not against Sunnis but for the sake of Syria. But the Alawites on the course kept saying they want to kill the Sunnis and rape their women in revenge," said Samer.

Syrian residents living in areas controlled by the army or militias say irregular forces have been increasingly "regularised" in recent months. These groups now brand themselves as the "National Defense Army" and seem to operate as a parallel force to the official armed forces - more lightly armed but without any of the oversight or responsibilities. 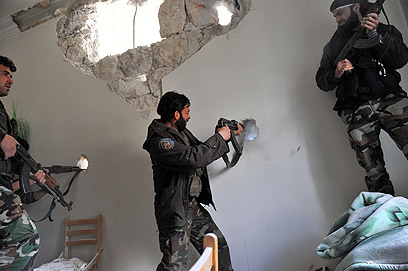 Shabbiha groups have been accused of some of the worst massacres of Sunni civilians, including one incident in the central town of al-Houla, in Homs province, in which more than 100 people were killed, half of them children. Authorities blamed rebels for the killings.

It is unclear how many former shabbiha fighters have been sent on courses in Iran, but some interviewees said they had assembled in groups of around 400 before being flown to Iran in smaller numbers. They believed the offer of training was open to many pro-Assad militias operating across Syria.

Syrian shabbiha fighters say Iran is also training Syrians and supporting their forces inside Syria, so it is not clear why courses have been run in Iran.

The fighters interviewed said they believed the training implied a growing crisis of confidence between Iranian forces and the Syrian army, which has been plagued with corruption as well as defections to the rebel side.

Nabeel, a muscular Christian fighter from Homs nicknamed "The Shameless One", said Iranian trainers repeatedly lectured on looting, a crime widely committed by fighters on both sides.

"On our first day of training, the Iranian officer overseeing our course said, 'I know exactly what is going on in Syria and want to tell you one thing: If you joined the National Defense Army for looting and not to defend your country, you will die an ugly death and go to hell'."

The trainees interviewed said they were divided into groups. Some trained as ground forces with automatic rifles and mounted anti-aircraft guns, others as snipers.

The groups were all flown from Latakia air base to Tehran International Airport and then directly bussed to an undisclosed location, they said.

"As soon as we arrived we were put on buses with windows covered by curtains and they told us not to open the curtains," said the fighter Samer.

"We drove about an hour and a half before reaching the camp. It was straight from the airport to the camp, from the camp to the airport. We didn't see anything other than that camp."

All four combatants, who come from different towns and different militias, separately described the same experience. They said they were usually grouped into units of about 60 for training. The fighters said they were trained by Iranian officers who spoke Arabic but also relied on translators.

The units also had contact with Lebanese fighters, said the participants, who suspected those men of being Hezbollah terrorists helping to conduct training or participate in courses.

"There were some groups from Hezbollah training at the same base but there was no communication between our groups. They did their thing, and we did ours," said Sameer, another militiaman from Homs.

"I think their training was tougher than ours."

Iran has supported and helped train Syria's army under long-standing military cooperation agreements, but a push into training its paramilitary forces could aggravate regional rivals such as Israel, which is particularly wary of Syrian groups increasing coordination with Hezbollah, or Saudi Arabia.

"If the Saudis felt that the Iranians are really moving this game up, they will be sure to check that escalation by increasing assistance to rebel fighters," said Michael Stephens, a Doha-based analyst for the security think tank RUSI.

"Saudi Arabia is totally focused on this as a way to make the Iranians bleed ... keep the Iranians bogged down in this proxy war, bleed them dry."

The fighters described the training as far superior to skills they had been taught in courses inside Syria.

"Before I could only hit targets 50% of the time, now I can hit a target around 90 percent of the time," said Samer.

"In Syria, they made the priority defending the place we are in, no matter the price. In Iran, they told us to save our lives. If you lose the position but survive, you can recoup and regain the site another day. If you die, your position will eventually be lost."