World powers urged Iran on Friday to give a "clear and concrete" response to their offer to ease some economic sanctions if Tehran stops its most sensitive nuclear work, in talks aimed at calming tensions that threaten to boil over into war.

The six powers - the United States, Russia, China, France, Britain and Germany - met Iranian negotiators in the Kazakh city of Almaty at the start of the second round of talks this year, hoping to settle a decade-old row over Tehran's nuclear work.

But comments by representatives of the sides laid out starkly different visions of what each sought from the other, suggesting tough talks ahead for the rest of the day and Saturday in efforts to salvage diplomacy as a way of ending the nuclear impasse. 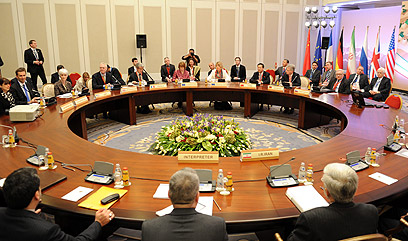 The six insist Iran cut back on its highest grade uranium enrichment production and stockpile, fearing Tehran will divert it from making nuclear fuel to form the material used in the core of nuclear warhead. They say Iran must make that move and make it first to build confidence that its nuclear program is peaceful.

But Iranian negotiator Ali Bagheri challenged the six countries on that point, telling reporters "what is being referred to as confidence-building measures are actions that both sides ... need to take" simultaneously.

He gave no specifics, but the comment could be an allusion to Iranian demands of sweeping sanctions relief instead of the offer from the six offering only a limited lifting of sanctions.

It also wants any nuclear concessions it makes to have specific limits instead of leading to others. Alluding to that demand, Bagheri said his country wanted to nail down "the start of the process, the dimensions of the process and the final outcome of the process."

And he described any would-be nuclear deal as only "part of a comprehensive process," suggesting Iran was still holding to its earlier demands of a broader deal also addressing security issues.

Such views are unlikely to sit well with the six the United States, Russia, China, Britain, France and Germany.

Without a conclusive deal in sight, Western diplomats are hoping for at least a serious discussion of specific points of their proposal made at the last talks in February, including closing a nuclear facility and shipping some enriched uranium stockpiles abroad in return for easing some sanctions.

"We are hoping the Iranian side will come back to us with a clear and concrete response ... to a fair and balanced proposal," Michael Mann, a spokesman for the six powers, told reporters as talks got under way in Kazakhstan's commercial hub.

The meetings Friday and Saturday are at best expected to achieve enough progress for agreement to hold another round of talks. But after 10 years of inconclusive negotiations, even an agreement to keep talking would give both sides short-term gains.

It would leave the international community with some breathing space in its efforts to stem Iran's nuclear advance. For Tehran, continued negotiations are insurance that neither Israel nor the United States will feel the need to act on threats to move from diplomacy to other means to deal with Iran.

If talks fail to produce sufficient progress, Western governments are likely to impose new economic sanctions, with the double aim of pressuring Tehran while seeking to persuade Israel to hold back from any military action.

"We cannot allow a situation in which a regime that calls for our annihilation has the weapons of annihilation. And I think that must be stopped at all cost," he said.

US President Barack Obama sought to cool tempers during a trip to Israel in March, saying diplomacy was the best option, but he hinted at the possibility of last-resort military action.

Experts say any response would not be immediate, as Iran will likely seek to keep diplomacy on track ahead of the election, in part to avert new sanctions, but without coming close to any deal.

"The probable failure of this round (of talks) does not mean that (military) strikes are imminent or that diplomacy later this year has no chance," said Cliff Kupchan, Middle East director at the Eurasia consultancy. "Obama's recent trip reassured Israel that Washington holds a tough position."

In the best case, Western diplomats say, this could give the sides time to iron out details of any future deal.

"They won't be able to negotiate seriously until after the election ... They can get started, but they can't finish," a senior US official said on Wednesday before heading to Almaty.

Reuters and the Associated Press contributed to the report