Domestic issues take center stage as Knesset opens summer session. 'It is difficult for a sitting PM to deal with someone who has already said he would like to be PM,' political scientist says

Prime Minister Binyamin Netanyahu opened his most recent copy of Time magazine, with its list of the 100 most influential people in the world, to find that his name, which had been on the list for the past few years, was gone. Instead, the name of his new finance minister, Yair Lapid, appeared.

Lapid, a political newbie who led his Yesh Atid (There is a Future) party to an impressive showing in the recent elections – 19 out of 120 possible seats in the unicameral body - is keen to show that he has what it takes to be Israel’s next prime minister: a goal he has stated publicly.

“It is difficult for a sitting prime minister to deal with someone who has already said he would like to be prime minister,” Eytan Gilboa, a political scientist at Bar Ilan University told The Media Line. “At the same time their ideologies are not that different.”

Some Israelis say that Netanyahu gave Lapid the thankless Finance Ministry job hoping he would fail, or at least lose some of the wave of popularity that swept him and 18 other brand-new and inexperienced politicians into the Knesset. It is not only Yesh Atid that is presenting new faces at the parliament’s opening. “This Knesset is extremely young and new,” Reuven Chazan, a professor of political science at Hebrew University told The Media Line. “In the United States, some 95% of the Congress is reelected every year; in Israel it’s usually about one-third and this time it’s almost half.” The other new political force is Naftali Bennett, founder of a party called Habayit Hayehudi (Jewish Home), which won 12 seats in the Knesset. Bennett is a former chief-of-staff for Prime Minister Netanyahu, and a supporter of building more Jewish communities on land Israel acquired in the 1967 war – one of the nation’s most controversial issues. 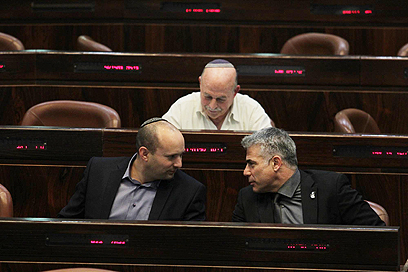 What also distinguishes the new government is that the ultra-Orthodox parties, which had been part of every governing coalition for the past two decades, are now in the opposition. They are hoping that the new alignment will fail, and Netanyahu will be forced to look to them to return and prevent the government from falling apart.

Israeli analysts, however, say that is not likely, at least in the short run. Lapid and Bennett need the experience of a political apprenticeship and want this government to last as long as possible. Both were also elected to focus on domestic issues such as ending draft exemptions for the ultra-Orthodox community and cutting the budget deficit of $11 billion. “This is the first government in quite some time that instead of focusing on foreign and security policy - which is how the world sees Israel - will focus on taxation, and drafting the ultra-Orthodox,” Chazan said. “This is a breath of fresh air and what the voters wanted – to focus on internal issues. But it also means this government probably won’t do much on foreign and security policy.” If, however, Netanyahu decides to move forward on a peace deal with the Palestinians, either because of heavy American pressure or because he wants international support for an Israeli attack on Iranian nuclear facilities, then the coalition could disintegrate. “Bennett doesn’t oppose negotiations, but he does oppose concessions,” Gilboa said. Lapid, according to Gilboa, is making a good first impression so far. To be the director general of the finance ministry, he chose Yael Andorn, who has spent the past 12-years in the budget division. She will be the first woman to hold the post. Lapid, who is secular, also chose as his number-two on the party list, an Orthodox rabbi, who was appointed education minister. Israel’s Knesset is never a placid place, and this session is expected to be even more stormy than usual. The ultra-Orthodox parties, which will use the platform of the opposition to vent their frustration at being left out of the coalition, have already prepared seven no-confidence motions against the government. At least for now, though, the Netanyahu coalition looks stable with 68 members versus 52 in the opposition. Yet, it remains to be seen whether the new government will serve a full four-year term or break apart early as so many Israeli governments have done. Article written by Linda Gradstein

Reprinted with Permission from The Media Line