Syrian minister lashes out at West for supporting rebels; denies claims of chemical weapons use by government; 'US manipulative, trying to repeat Iraq,' he blames

Syrian Information Minister Omran Al-Zoubi rejected US and British allegations Damascus had used chemical weapons against opposition fighters, and instead accused Turkey of allowing rebels to transfer chemical weapons across the border into Syria, the Syrian SANA new agency reported.

The minister talked to Russia TV on Friday, dismissing a claim by US officials a day earlier that they had evidence the chemical weapon sarin had been used in Syria on a small scale, CNN reported.

"Everything that the American minister and British government have said lack credibility," Al-Zoubi said. "It's baseless, and it's a new tactic to put political and economic pressure on Syria." 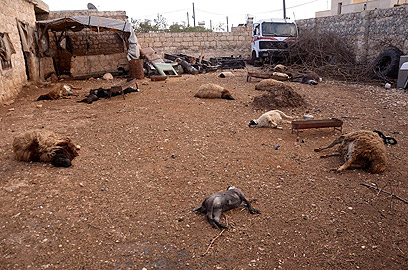 Al-Zoubi said the Syrian government is the one that called for an investigation of an incident in which it claimed chemical weapons were used by "terrorist groups." The government routinely labels rebel fighters as terrorists.

Syria does not have chemical weapons and would not use them if it did, he said.

The Americans "want to manipulate the issue, to let whoever used the chemical weapons ... get away (with it), and to repeat the Iraq example," Al-Zoubi said.

United States President Barack Obama said on Friday that the deployment of chemical weapons by the Syrian government was a "game changer" while noting that intelligence assessments proving that such weapons had been used were still preliminary.

"Horrific as it is when mortars are being fired on civilians and people are being indiscriminately killed, to use potential weapons of mass destruction on civilian populations crosses another line with respect to international norms and international law," Obama told reporters at the White House.

Britain's Prime Minister David Cameron agreed with US President Barack Obama that such use would represent a "red line" for the international community, but said the response would likely be political rather than military.

"This is extremely serious. And I think what President Obama said was absolutely right, that this should form for the international community a red line for us to do more," Cameron told the BBC.

But he objected to British military involvement in Syria. "I don't want to see that and I don't think that is likely to happen.

"But I think we can step up the pressure on the regime, work with our partners, work with the opposition in order to bring about the right outcome."

Also Friday, UN Secretary-General Ban Ki-moon asked the man heading the world body's investigation into chemical weapons use in Syria to report to UN headquarters on Monday for "consultations," a UN spokesman said.

The UN leader has repeatedly asked the Syrian government to give UN inspectors unrestricted access to the country as it looked into chemical weapons use allegations. The team, led by Swedish scientist Ake Sellstrom, is ready to head to Syria within 48 hours if an agreement is reached.