Israel's prime minister said Thursday that any peace deal reached with the Palestinians on his watch would be subject to a national referendum, backing a contentious step that could hinder peace efforts.

Negotiations between Israel and the Palestinians have been frozen for more than four years, but the referendum issue re-emerged this week when two of Netanyahu's main coalition partners reportedly signaled support for the proposal.

The discussion comes as US Secretary of State John Kerry attempts to re-energize peace talks. This week, after some prodding by Kerry, Arab leaders sweetened a decade-old comprehensive peace plan in a gesture aimed at helping restart talks.

"If we get to a peace agreement with the Palestinians, I'd like to bring it to a referendum," Netanyahu said at the start of a meeting with the visiting Swiss Foreign Minister Didier Burkhalter. Israeli politicians have in recent days debated the contentious issue, following a media report that said Netanyahu's main coalition partners, Naftali Bennett and Yair Lapid, are seeking a referendum on an agreement with the Palestinians and would raise the issue again in parliament. 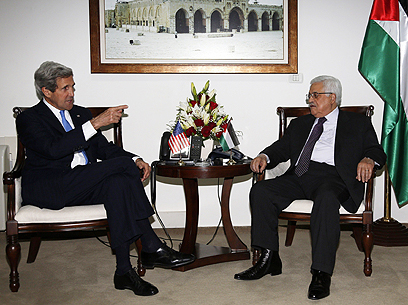 A spokeswoman for Bennett could not immediately be reached and Lapid's party said it was studying the issue and did not yet have a position.

Israel passed a bill in 2010 governing peace negotiations that would require approval by two-thirds of parliament or, failing that, a majority of voters in a referendum if the Golan Heights or east Jerusalem are to be ceded in any deal. The law was seen as an attempt by hardliners to add an additional obstacle to any efforts to cede the annexed areas as part of any future peace agreement. While a majority of Israelis support a two-state solution with the Palestinians, polls tend to show most oppose dividing Jerusalem. In the 1967 Mideast war, Israel captured the city's eastern sector — which the Palestinians want as capital of their hoped-for state, along with the West Bank and the Gaza Strip — as well as the Golan Heights from Syria. Justice Minister and chief peace negotiator Tzipi Livni has said she opposes a referendum, saying the difficult decisions Israel would face in deciding to cede land should be left to democratically elected leaders. "We were chosen in elections — by the people — with the goal of deciding correctly on their behalf," she told Army Radio this week. Proponents of a referendum say it is the only process that would provide popular legitimacy for a peace agreement. Livni was set to meet Kerry in Washington later Thursday, an official said, adding that the two were expected to discuss "steps to restart the negotiations," including the new Arab initiative. The official spoke on condition of anonymity because she was not permitted to discuss the meeting with the media. The Arab initiative, first floated in 2002, offered a comprehensive peace between Israel and the Muslim world in exchange for a withdrawal from all territories Israel captured in the 1967 Mideast war. Sweetening the offer this week, the Arab sponsor said final borders could be modified through mutually agreed land swaps. This flexibility could allow Israel to keep some West Bank settlements and parts of east Jerusalem as part of a deal.

Palestinian officials have in the past also broached the topic of a national vote, saying that Palestinians, including those in exile, would be able to vote on any future peace deal in a referendum.