Syria's official news agency SANA reported Saturday that President Bashar Assad visited Damascus University in the capital's al-Brahamcha neighborhood. It is his second public appearance in a week and its report comes in the backdrop of a reported Israeli attack on a Hezbollah-bound missile shipment containing advanced, long range, surface-to-surface missiles. Reports which Hezbollah, as well as Israeli officials, deny.

The report says Assad inaugurated a statue dedicated to "martyrs" from Syrian universities who died in the country's uprising and civil war. 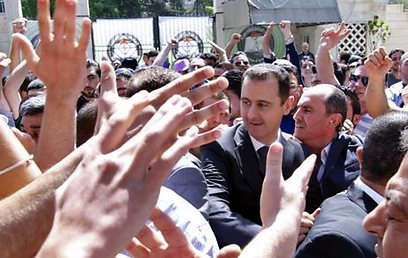 A photograph posted on Assad's Facebook page showed him surrounded by bodyguards as young men, who appeared to be students, waved at him.

Assad rarely appears in public, but on Wednesday he visited a Damascus power station to mark May Day, while two bombs exploded near the city center, killing 14 people and wounding an additional 15, Syria's state news agency reported.

SANA said the blasts were caused by two makeshift bombs which went off on Khalid Bin Walid street and the nearby Bab Mesalla Square.

It said the bombs were planted by "terrorists," a term the government uses to describe rebels fighting to topple the Syrian leader.

The last time Assad was seen prior to Wednesday's May Day appearance was in late March.