Considered the most important cemetery in Judaism, its dry earth is sent all over of world. Yet despite its importance, and even though the state comptroller issued a harsh report about it, The Mount of Olives is still open and unprotected, at the mercy of the residents of east Jerusalem. Menachem Begin, Eliezer Ben-Yehuda, S.Y. Agnon and Rabbi Kook are turning over in their graves

If they only knew what was going to be happening someday in the future, it may very well be that Eliezer Ben-Yehuda, S.Y. Agnon, Rabbi Abraham Isaac Kook and Menachem and Aliza Begin would have thought twice before requesting to be buried on the Mt. of Olives. The most ancient and largest Jewish cemetery in the world, and in all likelihood the most important, has in recent years been abandoned to vandals, criminals and illegals who turned it into an abused public area, more closely resembling a garbage dump.

Exactly two years ago, in May 2010, then-State Comptroller Micha Lindenstrauss referred to conditions on the Mt. of Olives in a report. “Rehabilitation of the cemetery is proceeding at a snail’s pace, its level of maintenance is unsatisfactory, security is extremely low, and vandalism and criminal incidents continue to occur in it. We strongly suspect that if security is not ensured, all of the monies and work invested in will go down the drain,” Lindenstrauss wrote at the time.

Several years before, the government decided in “Priorities – Reinforcing the city of Jerusalem,” to allocate more than NIS 80 million (about $22M) to deal with this issue. “There are serious doubts that the investment of millions of shekels in restoration and development works will go down the drain,” wrote the comptroller, in an understatement.

In the two years since, there was little change. After all, the dead are unable to protest, and the authorities are turning a blind eye, resulting in no real change on the ground. The site, where many of the outstanding Jewish leaders of the past few centuries along with tens of thousands of other people are buried, has been abandoned and forgotten. The first problem the Mount has is its location – east Jerusalem, fertile ground for nationalist-based vandalism. In recent years, hundreds of headstones in the cemetery were destroyed and shattered or covered with garbage and excrement. Families who came for gravesite visits to their dear ones’ final resting place found empty liquor bottles, used condoms and other evidence of especially lively ‘night life.’ “In the mornings, we have been finding charcoal grills, used syringes, and all sorts of ugly sights among the graves of leading Jewish leaders and thinkers,” is how Rabbi Haim Miller, former Deputy Mayor and head of the Movement for Jerusalem and its Residents, described the situation.. “It has become a nightclub and brothel for the Arabs of east Jerusalem who are destroying the gravestones and turning sections into dog dens. There is no greater shame for the Jewish State than this. It embarrasses me to state that in the largest Jewish cemetery in the world there is not even one toilet stall, and all of the faucets and benches have been stolen or destroyed.” 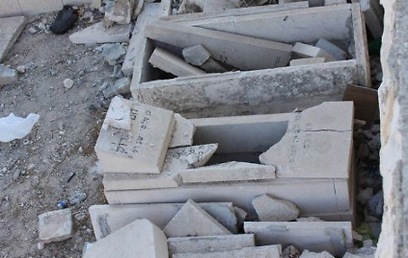 The first Jews were buried on the mountain during the Bronze Age. With the construction of the Holy Temple on the adjacent mountain, the cemetery became popular among Jerusalem’s departed, because Jewish tradition holds that whoever is buried on the Mt. of Olives will not undergo painful torments during the resurrection of the dead (when the Messiah comes), and worms will not devour the body. Throughout the entire world, Jews are buried with a small sack of dust from the Mt. of Olives by their side.

In the late 1950’s, construction of a small mosque was begun in the Ras al-Amud Square on the old Jerusalem-Jericho road. Even before the Jordanian laws which were then applicable to the West Bank, construction of the mosque was never legalized. Only after the Six-Day War was the building completed, and a decision was made to maintain the status quo – the mosque would remain as built, but the land adjacent was declared State land because it is part of the ancient cemetery. 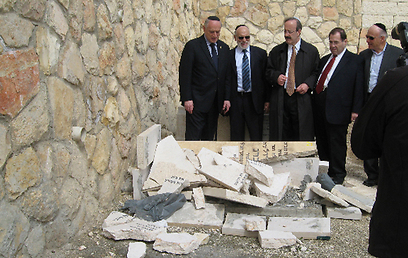 However, when the siren for Memorial Day for the Fallen in Israel’s Wars and Terror Attacks recently echoed throughout the country, young people and the families of fallen soldiers standing in the ancient cemetery found it difficult to concentrate. Sounds of power hammers and machines for concrete were pounding away in the mosque adjacent to the cemetery fence, heard throughout the mountain. The laborers working so energetically were not doing so to deliberately disturb mourners, but simply because it’s the only day of the year they can build the illegal additions to the mosque without anyone disturbing them. The story of the mosque provides an instructive example of the Municipality of Jerusalem’s failure in handling open and transparent criminal acts.

More than 300 meters (984 feet) of the area belonging to the Mount of Olives cemetery has already been annexed to the mosque, which presently stands 10 paces from the plot belonging to the man who revived the Hebrew language, Eliezer Ben-Yehuda and his family, and only a few meters from the graves of Menachem and Aliza Begin. The former Prime Minister refused to be buried in the plot reserved for the great leaders of the Jewish People (on Mt. Herzl) and requested that, “when the time comes, I ask to be buried on the Mt. of Olives, near Meir Feinstein and Moshe Barazani.” Imprisoned by the British, his two underground comrades killed themselves rather than be hung, and now Begin is buried in a simple plot overlooking the Temple Mount from afar, but adjacent to the mosque.

The area on which the mosque is built is considered especially prestigious due to its proximity to the site of the Holy Temple (Beit Hamikdash) and the price of a tiny piece of land (a plot for a grave) begins at $20,000 – to the Burial Society (Hevra Kadisha). The demand is so high that the gravestones are situated very close to one another, and sometimes the only way to place a stone on a grave (Jewish custom upon leaving a gravesite visit) is to throw it from afar. 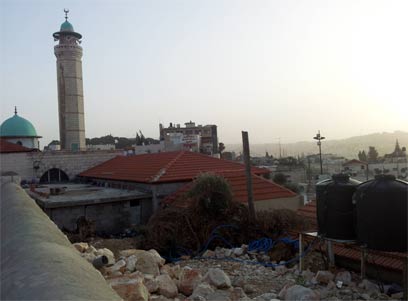 In October 2010, right-wing activist Arieh King filed a first complaint with the Jerusalem Municipality. A few months afterward, Ofir May, head of the Municipality’s Inspectorate, wrote to Legal Counsel Adv. Amnon Merhav and to the Municipality’s Chief Prosecutor Adv. Einat Ayalon, “In the eastern section of the city, there are several mosques constructed without building permits, constituting construction felonies. Criminal case files were opened for them, however, the enforcement processes did not succeed in applying the Law, due to the sensitivity involved.”

May continued, and stated that “In the past, I contacted the Municipality’s Attorney on the issue, and he contacted the Attorney General about this, (however), I do not know whether there was an answer or what it was. The issue has recently come up again due to the construction work going on without a permit, enlarging the mosque in the Ras al-Amud neighborhood. I wish to receive clear directives on how to handle the mosques.” As of now, these directives have still not been received. Since then, the mosque has only become bigger, and expanded into the cemetery area. Although Jerusalem City Hall claimed that this involved “an internal renovation of the bathrooms and moving the faucet installations,” they did demand that the Waqf cease adding to the building. Since then, the construction work has been conducted at night and on weekends, with the building serving as lodging for illegals. A Jerusalem Police official estimated that this is a deliberate policy so as not to inflame hostilities. “Here there is a super-explosive potential in one of the most flammable places in the whole world,” said the Police official. “For one building, it’s not always worth it to set fire to the entire area. Sometimes it’s easier not to enforce every violation.” The official response from the Jerusalem Police was that “enforcing the construction laws is the Municipality’s responsibility. The Police emphasize that each time it was asked to help Municipal Inspectors in delivering injunctions or enforcing them, they were accompanied by police officers who made sure to execute them fully and completely.” Jerusalem City Hall stated. “The Municipality operates according to the Law and pursuant to instructions from the State’s Attorney on handling construction infractions in religious institutions. There is a construction infraction on that site, which is being handled by the Municipality in court. Continued handling of the issue is in coordination with all of the relevant authorities.”

Meanwhile, what is saving the Mount is the fact that among other graves are also the parents of a number of very wealthy Jews from all over the world. The brothers Avraham and Menachem Lubinsky, businessmen from the US, recently came to visit their parents’ graves and were shocked by the situation. They established the “International Committee for the Preservation of Har Hazeitim” and began to exert heavy pressure on the Israeli government and the Jerusalem Municipality.

The Americans find it difficult to grasp the feeling of insecurity that visitors experience at the Mount – a feeling to which most Israelis apparently have become accustomed. The pressure that they are exerting is now beginning to bear fruit in the form of widespread renovation of destroyed gravestones, the installation of 137 security cameras throughout the cemetery, and the arrest of dozens of young Arabs for vandalism. For now, the overall effect of rehabilitating the Mount is displacing some of the terrorist stone-throwing activities directed at Jews traveling to the Mt. of Olives. Each week, drivers are stoned on the A-Tur and Ras al-Amud roads, usually by bored adolescents. The International Committee for the Preservation of Har Hazeitim recently sent a letter to Prime Minister Benjamin Netanyahu appealing for an increase in the punishment to minors in the cemetery area, since they are usually detained and then immediately released. “We are obligated to restore security and holiness to the Mt. of Olives,” declared American businessman Avraham Lubinsky, the Committee Chair. “In the majority of western countries and many US States, there is specific legislation requiring imprisonment for defilers of graves, up to several years in prison.” The letter was signed by leaders of the Rabbinical Council of America, the National Council of Young Israel, Agudath Israel of America and the Orthodox Union, as well as the Executive Vice Chairman of the Conference of Presidents of Major American Jewish Organizations, Malcolm Hoenlein. All of the organizations benefit from a very strong lobby in Israel and the US. If not for tradition and history, perhaps it is through politics that those buried on the Mt. of Olives will have their honor restored.