Israel's airstrikes on Syria could add pressure on the Obama administration to intervene in Syria, a key Republican said on Sunday, but the US government faces tough questions on how it can help without adding to the conflict.

Hours after Israeli jets bombed Syria on Sunday for the second time in 48 hours, several top US lawmakers voiced concern over the cascading uncertainty in the Middle East where a civil war has been raging in Syria for more than two years.

Republican Senator John McCain said the latest Israeli airstrikes, described by a Western source as attacks on Iranian missiles bound for Lebanon's Hezbollah, will just put more pressure on the administration to act although President Barack Obama has said he has no plans to send ground troops to Syria.

"We need to have a game-changing action, and that is no American boots on the ground, establish a safe zone and to protect it and to supply weapons to the right people in Syria who are fighting, obviously, for the things we believe," McCain said on "Fox News Sunday." "Every day that goes by, Hezbollah increases their influence and the radical jihadists flow into Syria and the situation becomes more and more tenuous," he said. US Defense Secretary Chuck Hagel said last week that Washington was rethinking its opposition to arming the Syrian rebels. He cautioned that giving weapons to the forces fighting President Bashar Assad was only one option, which carried the risk of arms finding their way into the hands of anti-American extremists among the insurgents. Obama said on Saturday that Israel has the right to guard against the transfer of advanced weapons to Hezbollah, but his administration has not commented further on the air strikes. 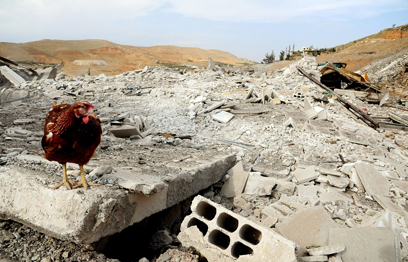 The United States has said it has "varying degrees of confidence" that chemical weapons have been used by Syria's government on its people, which violates a "red line" that Obama had established against such action.

Obama has repeatedly shied away from deep US involvement in the Syrian conflict, which erupted in 2011 and has killed an estimated 70,000 people and created more than 1.2 million refugees.

White House deputy spokesman Josh Earnest told reporters on Air Force One on Sunday that the White House was "horrified" by reports that more than 100 people were executed on May 2 in Baida, Syria.

State forces and militias loyal to Assad stormed the coastal village on Thursday and a pro-opposition monitoring group said many of those killed appeared to have been executed by shooting or stabbing.

McCain criticized Obama for failing to intervene to stop that massacre and for not acting when the chemical weapons red line was crossed.

Republican Representative Mike Rogers, chairman of the House Intelligence Committee, described the situation in the Middle East as "deteriorating by the day" because of the massive influx of foreign fighters pouring into Syria that could reach more than 10,000 this year.

"Hezbollah is now moving troops - Hezbollah troops, financed by Iran - across Syria. They're engaged in the fight to protect the Assad regime," Rogers said on CBS's "Face the Nation." "You have the al-Nusra Front, which is an al-Qaeda front organization in the thousands showing up."

He said all fighters were trying to get their hands on chemical weapons and more sophisticated conventional arms. In addition, refugees were fleeing the country and threatened to add more instability to the region.

"This is as bad a situation I have seen in a long time that has an opportunity to cascade," Rogers said.

He said the United States needed to provide leadership through intelligence and training to the opposition, and work with the Arab League to help stabilize the situation in Syria.