Kenya: Iranians who 'planned attacks on Israelis' get life

Ahmad Mohammad and Sayed Mousavi, who were arrested in June while in possession of 15-kilogram stash of explosives, sentenced to two life terms for plotting to attack Western targets in Nairobi, Mombasa

A magistrate in Kenya has sentenced two Iranian nationals convicted of plotting attacks against Western targets in the African country to life in prison.

Iranian nationals Ahmad Abolfathi were arrested in June 2012 and led officials to a 15-kilogram (33-pound) stash of the explosive RDX. At the time of the arrests, officials in Kenya said the two planned to attack Israeli targets, as well as American or Saudi targets.

Magistrate Kaire Waweru Kiare on Monday sentenced the two to life in prison on one charge and additional years in prison on other charges.

Prosecutors said the two had explosives "in circumstances that indicated they were armed with the intent to commit a felony, namely, acts intended to cause grievous harm." 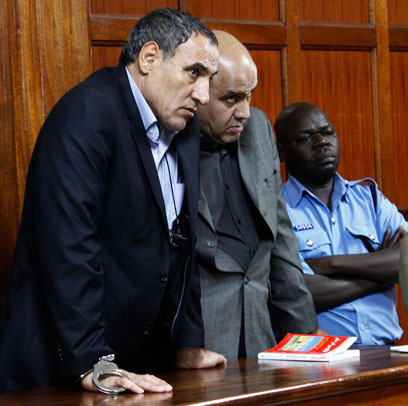 "I shudder to imagine the amount of damage that could have been seen," Judge Kiarie said. The Iranian government denied that it was part of any plot to target Kenya.

The court said Mohammed and Mousavi were suspected to have links with a network planning bombings in the capital, Nairobi and the coastal city of Mombasa.

Judge Kiarie said he had decided to sentence them to life in prison because the "cry of victims of previous terrorist attacks is louder" than their pleas for leniency, AFP reported.

Defense lawyer David Kirimi described the life terms as "outrageous" and said appeals would be launched.

"The sentencing is wrong, misconceived and outrageous, and an injustice to our clients," Kirimi told AFP.

Israeli businesses in Kenya have been targeted in the past, including the al-Qaeda-claimed bombing of an Israeli-owned hotel in Mombasa in 2002, in which 18 people died, as well as a failed missile strike on Israeli charter plane at the same time.

The Iranian government denied that it was part of any plot to target Kenya.

On Sunday, its ambassador to Kenya, Malik Hussein Givzad, said the embassy would help the families of Mohammed and Mousavi to appeal against the judgment.

"As an embassy, what we can do is to assist the families of the convicted to seek redress at the High Court, if the lawyers feel that there was no concrete evidence," Givzad was quoted by Kenya's Daily Nation newspaper as saying.

Iranian agents are suspected in attacks, or thwarted attacks, around the globe in recent years, including in Azerbaijan, Thailand and India. Most of the plots had connections to Israeli targets.