Diplomats: Iran may be limiting growth in atom stockpile

Iran appears to be pressing ahead in using some of its most sensitive nuclear material to make reactor fuel, diplomats said on Monday, a step that could help buy time for diplomacy between Tehran and world powers.

Iran's possession of medium-enriched uranium gas is closely watched in the West as Israel, which has threatened to attack its arch-foe if diplomacy fails to stop its nuclear drive, says it must not amass enough for one bomb if further processed.

Since Iran in 2010 began refining uranium to a fissile concentration of 20% - a relatively short technical step away from the level required for nuclear arms - it has produced more than the 240-250 kg which would be needed for one weapon.

But while the stockpile has expanded, Iran has still kept it below the Israeli "red line" by converting part of the uranium gas into oxide powder in order, Tehran says, to yield fuel for a medical research reactor in the Iranian capital.

Three diplomats said they believed Iran had continued this activity - thereby slowing the growth of the amount of 20% uranium gas - since the UN atomic agency issued its last report on Tehran's nuclear program in February. 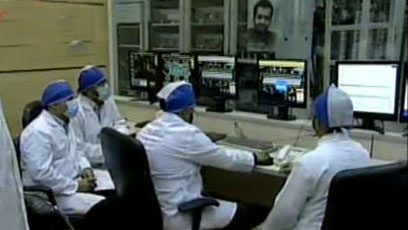 "Our impression is that it is fairly steady what they are doing," one Western official said. Another envoy said: "I think they are trying to demonstrate that their conversion is a significant amount, an amount that (Iran believes) should ease the concern of the international community."

If this is confirmed in the next report on Iran by the UN International Atomic Energy Agency (IAEA), expected in late May, the increase in the holding of 20 percent gas will be less than the production, which has amounted to about 15 kg per month.

In February, the stockpile stood at some 167 kg.

Critics say Iran is trying to achieve the ability to make atomic bombs. The Islamic Republic denies this, saying says it needs nuclear power for energy generation and medical purposes.

But while the uranium conversion activity may postpone any decision by Israel on whether to strike Iranian nuclear sites, the diplomats made clear Tehran must do much more in order to allay Western suspicions about its atomic program.

"Simply converting is not enough," one of them said.

Turning uranium gas into oxide powder in order to make fuel plates for the Tehran research reactor may be just a temporary positive development because the process could be reversible, Western experts say.

Iran could reconvert its entire inventory of 20% enriched oxide powder into gas "in a matter of a few weeks," said Mark Hibbs of the Carnegie Endowment think-tank.

"Reconversion is not hard," said Mark Fitzpatrick of the International Institute for Strategic Studies think-tank.

"Once the initial hiccups are overcome, the chemical process is straightforward."

But Iran's uranium oxide powder, like its other nuclear material, would be under IAEA safeguards and its inspectors would notice if it was being transformed back into gas form, unless it was done at a secret facility, experts say.

Were Iran to inform the IAEA that it intended to reconvert the material into gas form, "that step would immediately precipitate a crisis," Hibbs said.

Israeli Prime Minister Benjamin Netanyahu has said Iran was "continuing to get closer to the red line."

The six world powers involved in diplomacy with Iran want it to stop enriching uranium to 20% and suspend work at the underground Fordow site where most of this activity is pursued.

In their last meeting in early April, Iran refused the powers' demand. The two sides' chief negotiators will meet again on May 15 in Istanbul.