Gazing out at the rubble which was all that remained of a four story apartment complex in the city of Azaz just south of the Turkish border, 41 year old bricklayer Khalid Jaza’iri did not see much to be optimistic about.

“The regime is slaughtering us, we are no longer making progress and the world gives us only words when we need bullets,” he said sadly.

With the Syrian government reversing losses on the battlefield and showing willingness to defy the international community by employing chemical weapons, Syrians in rebel controlled territory are increasingly losing hope they will emerge victorious in the country’s revolution. And Western nations’ empty promises have only reinforced their belief that they have been abandoned to bear the brunt of the regime’s fire power. 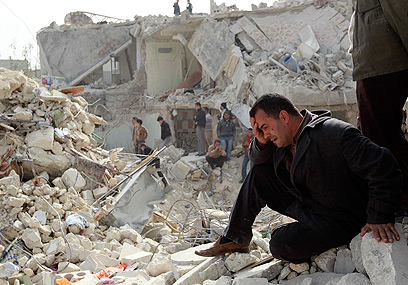 Recent comments by US Secretary of Defense Chuck Hagel that “arming the rebels – that’s an option,” have done little to alleviate the skepticism Syrians feel after two years of false hopes. They charge that American officials offer only encouraging words followed by inaction.

“His bold statements mean nothing to us,” complained 31 year old Muhammad Mosuli, an unemployed driver. “We heard the West’s assurances of water in the desert only to be given sand.”

Syrians are particularly exasperated with an American administration that makes promises it cannot keep. President Barack Obama asserted in August that “a red line for us is we start seeing a whole bunch of chemical weapons moving around or being utilized. That would change my calculus.” Rebels believed the Americans had drawn a line in the sand.

But after American intelligence agencies declared that the regime used chemical weapons, President Obama backtracked, leaving even his most diehard Syrian supporters crestfallen. 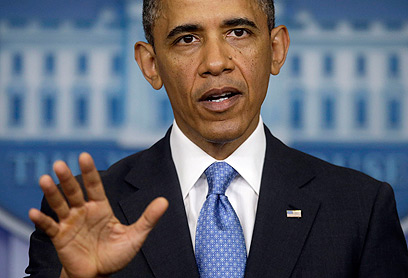 “If we end up rushing to judgment without hard, effective evidence,” the president said last week, “then we may find ourselves in the position where we can’t mobilize the international community to support what we do.”

Today, Syrians have lost all hope in America’s courageous declarations. “Where is Obama after (Syrian President Bashar) Assad used the most vile weapons against us?,” asked 24 year old Samir Anwar in the city of Tel Rifa’t. “We don’t expect anymore from America,” he said, plopping falafel balls in a deep fryer. “We are alone in this war.”

It is a fight that is increasingly turning against the rebels. After entering Aleppo, Syria’s second largest city, last summer, the opposition was confident that it could topple the regime by the end of the year. Today, though, the battle is deadlocked with each side hunkering down behind its sandbags.

Worse, the regime has begun to go on the offensive. Last week it made a big push to dislodge rebel forces in the central city of Homs. News of the regime’s battlefield gains has people in Azaz worried.

“People here are beginning to say that the war will never end,” admits 34 year old activist Rashid Hawrani. “Some say living with the regime is better than living in rubble with no bread and no electricity.”

It is a far cry from the optimism Azaz’s residents expressed last summer when they dislodged regime troops and withstood punishing air attacks that reduced large swaths of the city to little more than ornate piles of stones. Control of the town allowed the rebels to seize the border crossing with Turkey, facilitating the transportation of aid.

Azaz still bustles with aid convoys, activists and foreign journalists. But the enthusiasm and confidence have given way to gloom as once beaming faces have been replaced by looks of dejection and melancholy.

“Back then, we were jubilant,” Jaza’iri says within sight of a destroyed tank. “But now, I see nothing to be optimistic about. We are losing hope. We are losing our souls.”