Though they originated in the relatively marginal Neturei Karta sect, the playing cards' distributor claims they garner much enthusiasm in the haredi mainstream outside the group's Jerusalem cloister.

The "Teach the youth" cards are composed of a series of quartets showcasing quotes, famous figures ands events linked to anti-Zionist ideology. One card shows the State symbol, a menorah, bursting in flames above an inscription thanking God for banishing idolatry from Israel. 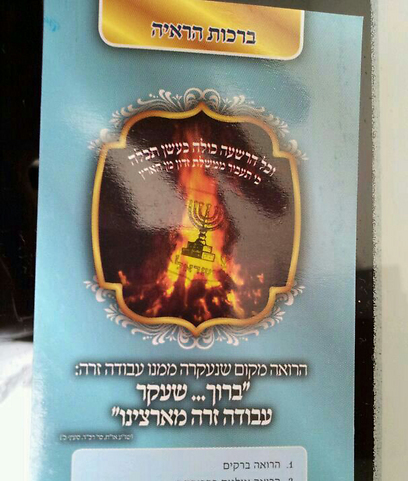 Another quartet is themed with rabbis' remarks against the State, and another commemorates haredim whose death is attributed to police violence or to 'Zionist conspiracies.'

One figure who gained special note in the playing cards is the deceased rabbi Amram Blau, a Neturei Karta founder and one of the haredi sector's most revered protesters of the regime.

A whole quartet is devoted to Blau, who is shown mourning Independence Day and zealously protesting against the State of Israel.

The figures and inscriptions on the cards testify to their makers' marginality in haredi society, but the distributor told Yedioth Ahronoth that sales are up across the haredi spectrum.

"Hatred of Zionism is no longer a marginal issue," said the distributor, a Neturei Karta man and the grandson of Moshe Hirsch, former Jewish affairs minister for the Palestinian Authority.

"In a Lag Ba'Omer rally we sold 2,000 playing decks. They're for all sectors of the haredi world, and if necessary, we'll print thousands of decks more."

Yoelish Kraus, a member of the prominen Eda HaHaredit anti-Zionist sect, estimated on Saturday that "if the State continues persecuting haredim, hundreds of thousands will disengage from the State and join us."