The Daily Beast says US senator crossed into Syria from Turkey with head of Free Syrian Army's Military Council; rebel leaders who met with him urged US provide them with heavy weapons and bomb Assad forces

WASHINGTON - Sen. John McCain on Monday became the highest-ranking American official to enter Syria since the bloody civil war there erupted more than two years ago, The Daily Beast reported.

According to the American news website, McCain, one of the fiercest critics of the Obama administration’s Syria policy, made the unannounced visit across the Turkey-Syria border with Gen. Salem Idris, the leader of the Supreme Military Council of the Free Syrian Army. He stayed in the country for several hours before returning to Turkey.

Both in Syria and Turkey, The Daily Beast said, McCain and Idris met with assembled leaders of Free Syrian Army units that traveled from around the country to meet the US senator. During those meetings, rebel leaders called on the United States to boost its support to the Syrian armed opposition and provide them with heavy weapons, a no-fly zone, and airstrikes on the Syrian regime and the forces of Hezbollah, which is increasingly active in Syria. 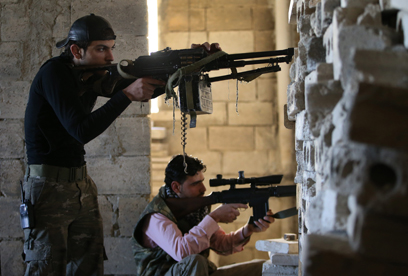 Speaking to The Daily Beast, Idris praised the McCain visit and criticized the Obama administration’s Syria policy. “The visit of Senator McCain to Syria is very important and very useful especially at this time,” he told the website. “We need American help to have change on the ground; we are now in a very critical situation.” McCain in south Turkey with US troops before entering Syria (Photo: Reuters)

Washington's official position is that it would be dangerous to transfer arms to extremist opposition elements in Syria and that any increase in the flow of weapons into the Arab country would make it more difficult to reach a political compromise and form a transitional government without President Bashar Assad. Idris' plea to the Obama administration is indicative of the rebels' growing concern over the Assad army's recent achievements on the ground and the increased involvement of Hezbollah in the war. It is estimated that a few thousand fighters from the Lebanese Shiite group are taking part in the fighting alongside forces loyal to the regime in Damascus.

McCain’s visit came as the Obama administration is once again considering an increase of support to the Syrian opposition, while at the same time pushing the opposition council to negotiate with the regime at an international conference in Geneva in early June.

Idris told The Daily Beast “What we want from the US government is to take the decision to support the Syrian revolution with weapons and ammunition, anti-tank missiles and anti-aircraft weapons. Of course we want a no-fly zone and we ask for strategic strikes against Hezbollah both inside Lebanon and inside Syria.”

According to The Daily Beast, there is no assurance the Obama administration will be able to convince the Syrian opposition to attend the Geneva conference, and Idris said the conference would only be useful if there are certain preconditions, which the regime is unlikely to agree to. “We are with Geneva if it means that Bashar will resign and leave the country and the military officials of the regime will be brought to justice,” he said.