In interview to Hezbollah TV station, Assad says Hezbollah involvement connected to Israel; promises to respond to alleged Israeli attack; claims Russia will make good on all arms agreements; suggests might run for president in 2014

Syrian President Bashar Assad gave an interview to the Hezbollah affiliated television network Al Manar Thursday and commented on the state of the civil war currently plaguing his country, the transfer of S-300 missiles from Russia and Hezbollah's involvement in the conflict. Lebanese newspaper Al-Akhbar had already published excerpts from the interview, including Assad's claim that the first shipment of S-300 missiles had arrived from Russia and that the Russians remain adamant in their commitment to complete the arms deal.

Regarding Israel, Assad said that "There is pressure by the people to open a new front in the Golan, and even in the Arab world there is readiness to join the fight against Israel." 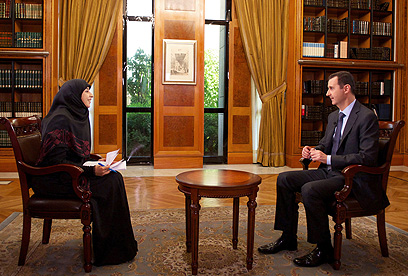 Regarding the S-300 arms deal and shipment from Russia, which has been a major source of concern for Israel, Assad said: "Everything that we have agreed on with Russians will take place. Parts of (the arms deal) have already taken place. The Russians and us will make good on all of our agreements."

Some time before the full interview was broadcast, the US National Security Council (NSC) Spokesperson Caitlin Hayden commented on the arms deal, saying that “Providing additional weapons to Assad – including air defense systems – will only prolong the violence in Syria and incite regional destabilization.”

At the beginning of the interview, Assad claimed that those scheming to harm Syria had failed, both by their own devices and by government forces.

"In addition to the fact that we have successfully foiled the plots at hurting Syria, those who devised them have also foiled them by their own accord." Assad further said: "We see the balance shifting in favor of the Syrian army. This is a fight over the homeland, not over the (president's) chair." Assad also commented on Hezbollah's involvement in the Syrian conflict. According to him, "It is impossible to separate between Hezbollah's involvement, the battle in Qusair and Israel's attacks." 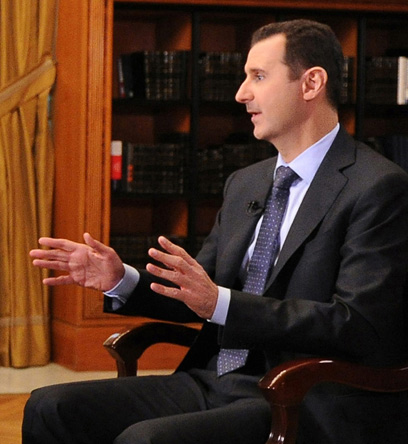 'Response to attack will be attack" (Photo: AP)

Syrian army and rebel forces have been clashing for a number of weeks in the strategic city of Qusair, not far from the Lebanese border. According to rebel claims, Hezbollah is charged with leading the Qusair battle in Assad's name.

Nonetheless, Assad denied that Hezbollah's involvement in the area is connected to the Syrian conflict, rather claiming it stemmed from an attempt, possibly by rebels, to "choke the resistance." The word "resistance" in this regard is a euphemism for the struggle against Israel. Regarding the attack on Damascus that was attributed to Israel, Assad said: "If we want to respond, the response against Israel needs to be strategic." He failed to supply additional details regarding the character of such a response, but said that "he would leave that to army leadership." He nonetheless offered a clue, saying "the response to the attack will be an attack." The Syrian president also commented on the peace summit currently attempted to be organized by the international community in Geneva, where, the international community hopes, government and opposition forces will meet in an attempt to reach a peaceful resolution to the fighting.

"The president does not give up his power, and everything that will be agreed on in the summit will be put to referendum," Assad said.

His government has already agreed to partake in the summit without setting preconditions; however, it still remains unclear whether the opposition will manage to present a unified front.

Assad was asked whether he intended to run as a presidential candidate in the 2014 election. Without hesitation, Assad answered that "When I feel there is a need for me to present myself as a candidate I will not hesitate to do so. But if I should feel that the people do not want me, I will not contend."