Op-ed: There is no justification to spend so much money on Peres' 90th birthday; he is not the Queen of England

Among the long chapters of Shimon Peres' career, his presidency will be remembered as one of the successfully ones. Peres is the right man in the right place. He is the most convincing Israeli "ambassador," and is extremely popular in the domestic arena as well. He represents Israel not as it is, but as we'd like it to be: Dignified and optimistic. Soon to be 90 years old, Peres remains active, full of energy, efficient, updated and witty. His age freed him of inhibitions that had disrupted him in the past. This has contributed to his reputation.

And yet, we can still ask something of him. Peres' 90th birthday is a celebration for the entire country, and precisely for this reason it should not be allowed to become a mega-event. Peres is not the Queen of England, whose birthday is celebrated as part of the effort to promote tourism. He won the people's sympathy because he restrained himself. So he should show restraint in this case as well.
Israeli Politics
Are we that corrupt?
Nahum Barnea
Disgust with politics a dangerous trend that undermines public faith in democracy
Are we that corrupt?

One of the distinguished guests at the 90th birthday events is Bill Clinton. Clinton is scheduled to take part in two events – one on June 17, on behalf of the Peres Academic Center, and another on June 18 – the opening of the Presidential Conference.

Clinton's visit will cost $500,000. According to other reports, the sum may be close to a million dollars. The bulk of this amount is Clinton's fee, while the rest will cover other expenses related to his visit. The Jewish National Fund has agreed to pay the entire amount, or most of it. JNF's involvement in the event was revealed by Yossi Sarid in a column he published in Haaretz on Friday.

This is a bad tale –from beginning to end. It begins with the faulty custom of naming institutions after people while they are still alive and expecting something of value to come out of it. One such institution is the Peres Center for Peace, which should have never been established. Despite the good intentions, despite the hundreds of millions that have been invested in it, it did not bring peace. All it brought is an ugly building on the beach in Jaffa. The tale continues with the collection of contributions from all sorts of shady individuals looking to clear their names. The president of the State of Israel cannot be connected with the solicitation of contributions. It is inappropriate and unethical. If the president wants to gather leading global figures in Jerusalem, the funding must come from one source only – the State. 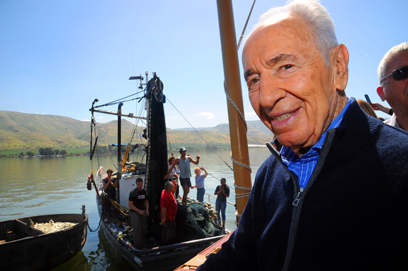 The tale ends with the odd pairing with the JNF - a strange institution. It is supposed to be a company that belongs to the Jewish people, when actually it belongs only to itself. The JNF has earned a great deal of money over the past few years due to its involvement in various real estate projects initiated by The Israel Land Administration. According to reports, the Fund has NIS 4-4.5 billion.

When Eli Aflalo (Likud, Kadima) was asked why he was giving up his Knesset seat for the position of JNF co-chairman, he said candidly: "This is a body that has a lot of money and is not subjected to the supervision of the state comptroller." Aflalo and the other co-chairman, Efi Stenzler, are sitting on a mountain of cash and are enjoying every minute of it. Everyone asks for their assistance; they are the "famous benefactor." Had old politics still existed in Israel, the government would have asked the two JNF chairmen for a few billion shekels in order to reduce the deficit and lower housing costs. In return the government would have given them what they really want – an extension of their term until 2017. Had new politics existed here, the government would have found a legal way to privatize the JNF. It is time to say goodbye to this anachronism while reducing the deficit and lowering housing costs. Unfortunately, given the choice between new and old politics, the Israeli politicians choose to schnor. Give me and I'll give you. It is a shame this is all Peres' birthday will be remembered for. He deserves more.