Alleged proof of chemical weapons' use in Syria

WASHINGTON - The Obama administration has concluded that Syrian President Bashar Assad's regime has used chemical weapons, including the nerve agent sarin, against the opposition seeking to overthrow him, US officials said Thursday, crossing what President Barack Obama has called a "red line" that would trigger greater American involvement in the crisis.

The officials said earlier intelligence assessments that indicated Assad likely used such weapons had now been corroborated. The officials spoke on condition of anonymity because they were not authorized to discuss the matter publicly.

Obama has said repeatedly that the use of chemical weapons would cross a "red line" and constitute a "game changer" for US policy on Syria, which until now has focused entirely on providing the opposition with nonlethal assistance and humanitarian aid.

Congress was also being notified of the chemical weapons determination on Thursday in classified documents sent to Capitol Hill, the officials said. The finding was aided by evidence sent to the United States by France, which along with Britain, announced last week that they had determined that Assad's government had used chemical weapons in the two-year conflict.

White House Deputy National Security Advisor Ben Rhodes later said that 100-150 Syrians have died from Assad’s use of chemical weapons, which has taken the US intelligence community nearly two months to confirm.

"Following a deliberative review, our intelligence community assesses that the Assad regime has used chemical weapons, including the nerve agent sarin, on a small scale against the opposition multiple times in the last year," he said in a statement. 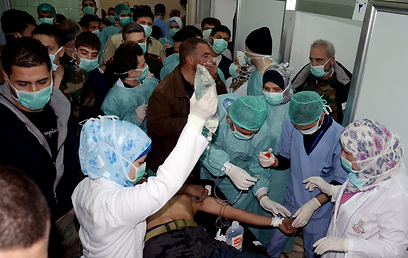 "While the lethality of these attacks make up only a small portion of the catastrophic loss of life in Syria, which now stands at more than 90,000 deaths, the use of chemical weapons violates international norms and crosses clear red lines that have existed within the international community for decades."

As a result, Rhodes said in the statement, President Obama has decided to provide direct non-lethal assistance to Syria’s Supreme Military Council.

"The Assad regime should know that its actions have led us to increase the scope and scale of assistance that we provide to the opposition, including direct support to the SMC," Rhodes said. "These efforts will increase going forward."

The deputy national security advisor also confirmed that the use of chemical weapons "is a red line for the United States," but stopped short of saying whether Obama will prescribe taking any forceful action against the Assad regime.

"The United States and the international community have a number of other legal, financial, diplomatic, and military responses available," Rhodes said. "We are prepared for all contingencies, and we will make decisions on our own timeline. Any future action we take will be consistent with our national interest, and must advance our objectives, which include achieving a negotiated political settlement to establish an authority that can provide basic stability and administer state institutions; protecting the rights of all Syrians; securing unconventional and advanced conventional weapons; and countering terrorist activity."

US officials did not find any evidence that opposition groups used chemical weapons against forces loyal to Assad, Rhodes added.

The White House said it has provided Russia with the latest assessment regarding the Assad regime's use of chemical weapons.

Obama will discuss the assessments, along with broader problems in Syria, next week during the G-8 summit in Northern Ireland.

Obama is also expected to press Russian President Vladimir Putin, Assad's most powerful backers, to drop his political and military support for the Syrian government.

"We believe that Russia and all members of the international community should be concerned about the use of chemical weapons," Rhodes said.

Thursday's announcement followed a series of urgent meetings at the White House this week that revealed deep divisions within the administration over US involvement in Syria's fierce civil war. While some State Department officials have been pressing for more robust action, advisers close to Obama are wary of sending weapons and ammunition into a war zone where Hezbollah and Iranian fighters are backing Assad's armed forces, and al-Qaeda-linked extremists back the rebellion.