100 protest in Abu Ghosh in wake of 'price tag' acts

Some 100 Jews and Arabs protested Tuesday in Abu Ghosh, where a 'price tag' act was perpetrated earlier Tuesday. The protesters cried out against the recent prevalence of "price tag" acts.

Residents of the Arab town, which is adjacent to Jerusalem, found the tires of 28 cars were slashed and walls in the area were spray painted with slurs such as "racism or integration," and "Arabs out," overnight Tuesday.

Protesters carried signs reading "light instead of terror," and cried out "no to racism, yes to neighborliness." Among the protesters were MK Reuven Rivlin (Likud-Beiteinu) and MK Amram Mitzna (Hatnua). 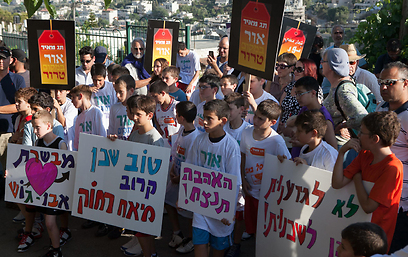 "'Price tag' is an act of terror and should be treated as such," said MK Rivlin, adding that "terror is terror whether it's nationalistically, racially or religiously motivated. We can't keep paying lip service and address these incidents as marginal cases. Every time we keep silent in the face of 'price tags' we enable the next 'price tag'."

The MK urged the Israeli government to address the issue, insisting that otherwise "we will all pay the price."

MK Mitzna told Ynet that the prevalence if the terror acts are a testament to the failure of the security forces.

"When we protest, we are all Abu Ghoshians; all the residents of the State of Israel feel ashamed and betrayed. To the caption 'Arabs go home,' I say 'Terrorists go to prison'; because terror is terror and it's about time our leadership does more than offer condolences to the victims over the phone and utilize all its resources in order to nab the terrorists.

Motti Cohen, who lives nearby, told Ynet: "We heard about what had happened; we were appalled and couldn't believe it. I have friends here… and came here to let them know that what happened is unrepresentative of the State of Israel and this region. We support them and are ashamed; what happens to them happens to us."

Members of the Abu Ghosh youth basketball team, in which both Jewish and Arab children play, also arrived at the protest.

"We've decided to cancel practice and bring the children to this protest to make them realize that the coexistence they implement every day is not at all obvious and that we must stand strong in front of many extremists who engage in inciting hate," the mother of one of the children said.

Isham Ibrahim, whose two cars were vandalized in the 'price tag' acts overnight, said "This demonstration makes us feel proud and strong. Our Jewish neighbors did not abandon us and made it here to support us."