Arens: Israel can get by without US security aid

Former US ambassador to Israel says possible phasing out of security assistance 'may be healthy for Israel. Ex-Defense Minister Arens says 'we can get along without it'

A legislative caucus created to educate Israeli lawmakers to the basic realities of the American system of government was launched on Tuesday in the Knesset, Israel’s parliament. Although a discussion of whether the United States should reduce its financial support for Israel seems like a strange subject for a group that seeks to foster bilateral relations, Israeli lawmakers representing seven political parties and a former American ambassador to Israel did just that as they celebrated the launch of the new Knesset Caucus on Israel-US Relations.

“We may be reaching a point that after discussion of how to assure the security and intelligence cooperation (between the US and Israel), we can actually phase out the security assistance,” former US Ambassador Dan Kurtzer told The Media Line. “It represents a very small part of Israel’s GDP. Israel needs access to the technology and needs assurances that R-and-D and other join projects will continue, but standing on its own two feet may be healthy for Israel.”

Support came from Moshe Arens, a former minister of defense, who also served as Israel’s Ambassador to Washington. Arens reminded the assembled parliamentarians and representatives of American Jewish organizations present that there was a time when US aid to Israel made up more than 20% of Israel’s GDP, while today it represents only 1.5% of the total budget.

“We love to get it, and our finance minister would probably kill me if he heard me say this, but we could get along without it,” Arens said. The United States is going through a financial crisis with debts in the trillions of dollars. We would be unhappy to find that aid is being cut but we could survive without it.” By the same token, Knesset member Nachman Shai of the Labor party, who is the initiator of the caucus, disagreed. “We do need the three billion dollars a year for defense and military purposes because we are still in a terrible arms race,” he told The Media Line. “If we want to maintain our qualitative edge over our enemies, the only way is to rely on America. At least in the next ten years I can see Israel totally dependent on America for this.” In 1987, the US assistance package was created with an annual allocation of $1.8 billion in economic aid and $1.2 billion in military aid. In his first term in office in the late 1990s, Prime Minister Binyamin Netanyahu agreed to gradually relinquish economic aid at a rate of $120 million per year over a 10-year period while military aid grew to its current level of $3 billion a year, almost three-quarters of which must be spent in the United States on the acquisition of American defense equipment, services and training. 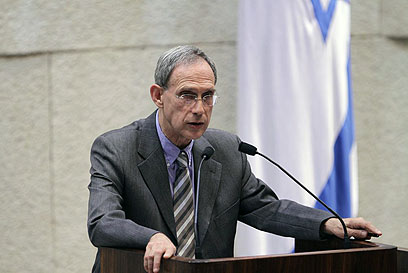 'Only way is to rely on America.' MK Shai (Photo: Alex Kolomoisky)

Despite the close alliance between the two nations, many on both sides believe that there are still fundamental misunderstandings about each other’s governments. The caucus had actually been formed during the previous government headed by Ronit Tirosh, who represented a party no longer in the Knesset. Following her exit, Jay Ruderman, the president of the Ruderman Family Foundation, approached Nachman Shai.

“I’ve been living in Israel for seven years and as I got to meet Knesset members and government ministers, I realized they didn’t understand the American Jewish community,” Ruderman told The Media Line. He also said that the generation of American Jews who remember Israel’s early history as an embattled nation, is being replaced by a younger generation with a different perspective. “The connection of the younger generation with Israel is changing,” Ruderman said. “They are more integrated into American society. If that relationship is changing, Israeli leaders have to be aware of those changes because they will impact the relationship.” Nachman Shai, who has extensive experience with the American Jewish community, said many of his fellow lawmakers don’t have a clue about the United States or its Jewish community. “I think there is a deep lack of information and understanding of America,” Shai told The Media Line. “I think I can use my knowledge to deepen their understanding and knowledge of the political system there; the culture of the US; and the Jewish community there. The Ruderman Family Foundation has already sent two delegations of Knesset members to the United States to learn about the American Jewish community. However, some of those who participated with the foundation are no longer members of parliament following the January election which saw 48-new faces sweep into the 120-member legislative body. Deputy Minister in the Prime Minister’s Office Ofir Akunis told The Media Line of his experience as a participant with the Ruderman Family Foundation delegation. “Such visits are, in my opinion, the best way to build and support the mutual understanding between our nations.” Among the caucus’s first time lawmakers is Rabbi Dov Lipman of the Yesh Atid party, an immigrant from the state of Maryland who had to give up his American citizenship in order to become a member of the Israeli parliament. “I’ve only been in the Knesset four and a half months,” Lipman told The Media Line. “I can definitely say that in terms of the misinformation about Israel, there is a lack of education here in terms of what we need to do in order to better portray ourselves in the (American) national arena.” Along with all of the positive sentiment, some of the tensions in the US-Israeli relationship were also on display. “What happens when there are differences of opinion between partners and allies?” former Defense Minister Arens asked. “If the subject at issue is of vital importance to one of the partners in the alliance, the other partner will defer. The issue of Judea and Samaria, of Israel’s borders, is of vital importance to the State of Israel. It’s not of vital importance to the US,” Arens said using the Biblical names for land Israel acquired in the 1967 war and remain the primary bone of contention between Israel and the Arab nations. Kurtzer spoke to the American side of the issue, explaining how pressure to reduce spending, which makes foreign assistance a natural target for trimming the US budget, can arguably be expected to affect Israel. He suggested to The Media Line that while so far Israel has been immune from the cutbacks resulting when “the American population sees their lifestyle declining...It is part of our dialogue to focus on areas where Israel has significant requirements and give back something to the US in budgetary distress.” In Shai’s estimation, “We have three or four years for this. At the end of this Knesset term I can tell you whether it worked or didn’t work. We have a lot of work to do.”