At closing of Presidential Conference, Netanyahu speaks of 'unprecedented earthquake' in Arab world, says Israel backs Kerry's peace efforts. Peres: We are a nation with a life wish

After three days of celebrations, speeches, panels and interviews, the fifth annual Israeli Presidential Conference concluded Thursday evening at the Israeli Convention Center in Jerusalem with a speech by Prime Minister Benjamin Netanyahu.

"We face great challenges, from Morocco to Pakistan, there is an unprecedented earthquake going on. There is a struggle in this region between medievalism and modernity. I am convinced the forces of modernity will win out," Netanyahu said.

During his speech, the PM expressed doubt as to the changes portended by Iran's new leadership, urging the international community to "keep up the pressure, and keep up the demands."

Addressing Wednesday's decision to export only 40% of Israel's natural gas reserves and preserve the remaining 60% for domestic use, Netanyahu said "It turns out Moses wasn't such a bad navigator after all. He came to the land of milk and honey- and gas. (...) We won't make the same mistake other countries made, we will fill up our country's coffers, for the benefit of every Israeli."

At the beginning of his speech, Netanyahu was heckled by a social activist who called on the government not to export any of Israel's gas reserves.

Turning his attention to the stalled peace negotiations, the Israeli premier told the conference, "We give (US Secretary of State John) Kerry all our support, because we want him to succeed. We must address the question, why are we unsuccessful in achieving peace with the Palestinians. Why have Israel's past six governments failed in promoting peace? 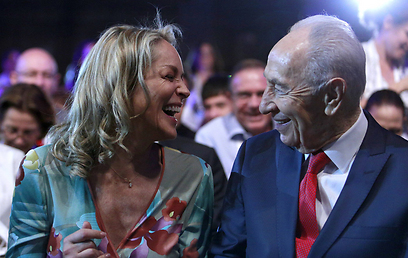 "Ultimately," Netanyahu said, "it is the willingness of the Palestinians to accept the existence of Israel as a Jewish state that will determine whether (progress to peace is made). This is the heart of the matter."

President Shimon Peres, who took the stage after the prime minister, said: "Israel facing ongoing attempts of delegitimization. But this conference contains within it a winning strategy to face these attempts. It is a legitimizing conference that shows how involved the residents of this nation are in creating, in renewing, in inventing. We are a nation with a life wish." 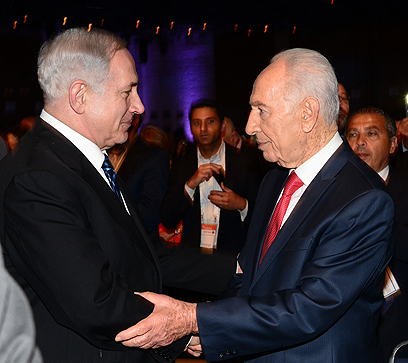 Jewish Agency Chairman Natan Sharansky, who spoke before Netanyahu, told those on hand: "When discussing the assimilation of Jews in the US and attempts to delegitimize the State of Israel, the answer to both issues is the same - the strengthening of ties between Israel and the Jewish Diaspora."

The conference marked the 90th birthday celebrations of Peres. A special and festive event was held at the conference's opening night on Tuesday, and included guests from all over the world such as former Unites States president Bill Clinton, former British Prime Minister Tony Blair, actors Sharon Stone and Robert De Niro, and many more.

During the conference's events Wednesday, Peres presented Clinton with Israel's highest civil distinction, the Presidential Medal of Freedom, for his "unwavering commitment to the Jewish people."

In another discussion, former Mossad chief Meir Dagan implicitly criticized the Israeli government, and emphasized that the political opportunities created in light of the changes in the Middle East cannot be missed.