In apparent 'price tag' act in Arab neighborhood of Beit Hanina, vandals damage vehicles, spray paint on wall, 'We do not remain silent in face of stone throwing'

The Security Cabinet labeled "price tag" attackers as an illegal organization, but the hate crimes in the Jerusalem areas continue: The tires of 21 vehicles parked along a road in east Jerusalem's Beit Hanina neighborhood were slashed. Residents of the Arab neighborhood on Monday morning also discovered the words, "We do not remain silent in the face of stone throwing" spray painted on a wall. In addition, a Star of David was spray painted on one of the cars.

Jerusalem District Police officials said an investigation has been launched and suspect the motivation behind the attack was nationalistic.

"I woke up this morning and found that five vehicles belonging to my family had been vandalized. This isn't the first time this has happened, but today it was on a larger scale. The tires of our neighbors' cars were also slashed. We are very angry," said Hafez, a Beit Hanina resident. "There is a lot of pain and suffering here, and we feel as though no one is helping us out. The (State's) response would have been different had Jews been the target of the vandalism," he said. 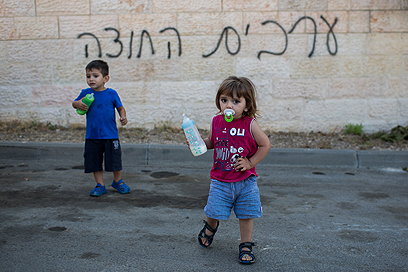 'Arabs out' on wall in Abu Ghosh (Photo: Ohad Zwigenberg)

The head of Tag Meir, a coalition of non-profit organizations from all sections of Israeli society working to counter Jewish terrorism and violence against Palestinians, said the "battalions of the extreme Right continue to damage Arab property, and from here the road to hurting people is short.

"This is underground activity of a Jewish terror group which must be stopped immediately by the Israeli government," Gadi Gvaryahu said.

Last week the tires of 28 vehicles were slashed in the Arab-Israeli town of Abu Ghosh, near Jerusalem. The hate slogans "Arabs out" and "Racism or assimilation" were scribbled on a wall in the town. Police Commissioner Yohanan Danino in response that "these are very serious acts, and soon there will be arrests." However, no arrests have been made so far.

Opposition leader Shelly Yachimovich (Labor) referred to the "price tag" that took place Monday morning in the Beit Hanina in Jerusalem, "It is not logical that Israel, which is blessed with intelligence and operational capabilities that are among the best in the world, cannot catch an extremist group that causes indescribable damage."

Yachimovich added, "The increasing frequency of hate crimes bearing the name 'price tag' is a blatant mockery and defiance of the rule of law in Israel." (Moran Azulay)

Also last week, the Security Cabinet strengthened law enforcement's ability to combat the growing phenomenon of "price-tag" attacks by declaring their perpetrators an "illegal association." However, it did not classify the attacks as acts of terror and those involved as terrorists, despite the recommendations of the attorney general, the head of the Shin Bet  security service and the ministers of justice and internal security.

The Prime Minister's Office said the decision "significantly expands the investigative and judicial tools available to the security forces and law enforcement authorities against so-called 'price-tag' actions." The new measures include stiffer sentencing and lengthier prison terms, according to an Israeli official. The PMO explained that the security cabinet "authorized Defense Minister Moshe Ya'alon to use his authority under defense regulations to declare 'price-tag' activists an illegal association."

"This will significantly strengthen the ability to fight 'price-tag' phenomena," it added.

"Price tag" refers to the strategy that extremist settlers and their supporters have adopted to avenge Palestinian attacks on Jews and for settlement freezes and demolitions. Several price tag attacks in recent months also have targeted Christian sites.