Leftist lawmaker Rozin says only crime of migrants held in Negev 'prison' is asking for better life. Amnesty: They're 'harassed' into going back home

Hundreds of African migrants are languishing in a desert detention center in southern Israel, where families may only meet once a week and where women and children sleep in a prison-like compound, according to lawmakers who caught a rare glimpse.

The visit to Sahronim center by a parliamentary delegation has allowed a look into the facility that plays a key role in Israel's attempt to stem the tide of thousands of African migrants who have crossed the long desert border with Egypt to the Jewish state in recent years.

"It's not a camp. It's a prison," said Michal Rozin, an opposition lawmaker with the dovish Meretz party. "You have guards. You are not free do what you want. These people are not criminals. Their crime is asking for a better life."

Israel, like other developed countries in Europe and around the Mediterranean, is a magnet for asylum seekers and economic migrants. Though the physical conditions at the Israeli detention camp appear harsh, large numbers of refugees face much worse around the region. Most of the 55,000 African migrants who made it to Israel over the past decade claim they were escaping forced, open-ended conscription in Eritrea or war in Sudan. Critics counter that most are job seekers attracted to Israel's wealthy economy and plentiful jobs in hotels, restaurants and cleaning. As their numbers swelled, they began to be seen as a threat to Israel's Jewish character. Most live in Tel Aviv slums, while their legal status remains in limbo. The government is trying to expel some and find alternative refuge for others. Over the past year, Israel mostly halted the influx with a fence along the Egyptian border. 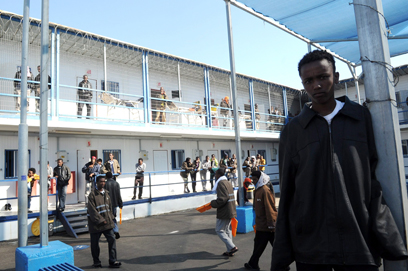 Those who have trickled in since, some 1,600 people, have been sent to Sahronim in the Negev desert, roughly an hour's drive from the city of Beersheba.

Israeli authorities say a detention facility discourages migrants by denying them a livelihood, and claim conditions at Sahronim are adequate. "There is no doubt one of the reasons we had such a flow of illegal economic migrants into Israel was because the economy was such a magnet," said Israeli government spokesman Mark Regev. "It was important for us to deal with that magnet." Lawmaker Rozin said detaining migrants in prison-style facilities is inhumane, even though she and other advocates said they are not mistreated, and they receive adequate medical care and food. Prison authorities allow few visitors, and reporters are banned. Lawmakers are allowed to request visits. Many of the 1,400 men live in tents holding about 10 people each. Fences separate them from the 200 women and some 11 children, housed in a low-slung building around a courtyard. Families are allowed to meet only on Thursdays for several hours, though they can request more time. Another section holds migrants who are convicted felons or who are suspected of committing a felony, Rozin said. The children have a kindergarten and adults may take courses, she said. They are counted every day by guards and barred from leaving, underscoring the sense of imprisonment, she said. One woman who was released to a shelter in February after eight months in Sahronim described a bleak existence. "The cells have steel doors," the woman, whose name was redacted, said in testimony to the advocacy group, Hotline for Migrant Workers. She said women slept 10 to a room in bunk beds. "Sometimes in the morning a little light comes in, but one cannot feel the sun." A video smuggled out of Sahronim by a member of the lawmakers' delegation this week and given to Israeli media showed men standing behind fences. "Prison, prison, prison, all the time," said one man who said he'd been there for 15 months but did not give his name. One woman said her children had nothing to do beyond two hours of daily activity. Israel's policy can be compared to that of European countries. In France, officials expel 30,000 migrants each year, and authorities search immigrant neighborhoods to find others. In 2011, over 50,000 migrants sought asylum in France; only about one-fifth of the applications were granted. Countries like Greece, Cyprus, Malta, Italy, which face the largest waves of migrants, also hold them in crowded detention centers that are widely criticized by rights groups. For decades in Europe, incarceration has been a politically popular move as communities often feel overwhelmed by culturally different immigrants, often mostly young men. In the region, Lebanon and Jordan have each absorbed some half million Syrian refugees fleeing the civil war in their country. In Jordan, many live in miserable desert refugee camps near the border. In Israel, only 136 people have left Sahronim since last year, said Sigal Rozen of the Hotline for Migrant Workers. Women identified as trafficking victims are sent to shelters. Egyptian smugglers often torture or rape women on their journeys. African migrants designated as refugees may be released, but advocates say Israel has dragged its feet on thousands of refugee applications it has received. It has ruled on just 17 cases, rejecting them all. Israel cannot deport Eritreans, who make up the bulk of African migrants, because they risk persecution by their government. They can be held for up to three years, but some have left following court petitions, Rozen said. It also doesn't deport Sudanese migrants, because Sudan is an enemy state. Advocates said Sudanese migrants are expected to stay in Sahronim, under pressure to leave to third countries. In recent months, officials quietly repatriated hundreds of migrants to newly independent south Sudan. Also, early this month, Israel said it found a third country that agreed to accept African migrants. It won't identify the country, and it's unclear when anyone will be transferred. About 530 Sudanese men have volunteered to accept Israeli financial assistance to be deported from Sahronim, according to Sara Robinson of Amnesty International Israel. Robinson said they are harassed into going home via third countries that may be less welcoming or even dangerous. "The deportations can't be considered voluntary," said Robinson. "If they were held in detention, and they can be held indefinitely, and that's your other option, we have serious concern about their free consent."