Kerry returns to Israel after flying to Jordan to meet with Abbas, is currently meeting with Prime Minister Netanyahu amid Likud tensions regarding PM's intentions. Later Friday, is scheduled to meet President Peres

US Secretary of State John Kerry shuttled between Israelis and Palestinians Friday in his latest diplomatic mission to coax the two sides back to the negotiating table and revive the Mideast peace process. Prime Minister Benjamin Netanyahu is currently meeting Kerry in Jerusalem. Kerry returned to Jerusalem for second visit in less than 24 hours after a 2.5-hour meeting with Palestinian President Mahmoud Abbas in Amman, Jordan, Kerry's base of operations during his stop in the Middle East.

After landing, Kerry began by meeting with Prime Minister Benjamin Netanyahu and then met met with President Shimon Peres at his residence in a quiet suburb of Jerusalem. Peres praised Kerry for his determination in trying to revive talks. 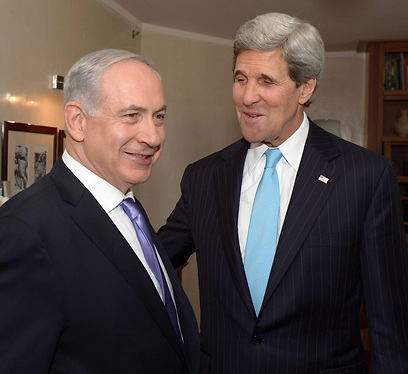 "I know this is difficult, there are many problems, but as far as I'm concerned I can see how (among) people, there is a clear majority for the peace process, a two-state solution, and a great expectation that you will do it and that you can do it," he told Kerry.

Regarding his meeting with Netanyahu a senior State Department official said the three-hour meeting with the prime minister involved a "detailed and substantive conversation about the way forward". Syria's civil war and Iran were also discussed.

This is the second meeting between Kerry and Netanyahu after the two held a lengthy dinner Thursday night. The goal is to restart talks on finding a two-state solution to the conflict.

Kerry, who's on a two-week swing through the Middle East and Asia, met with Abbas in a diplomatic area of the Jordanian capital early Friday. "It's good to be back and I look forward to our conversation. We have a lot to talk about, obviously, as you know," Kerry told Abbas. As reporters and photographers were ushered out of the meeting, Kerry turned to Abbas and said: "We had a good long meeting." It was an apparent reference to his meeting with Netanyahu the night before. "We're going back." The State Department said Kerry and Abbas had a "very constructive discussion" focused on advancing the peace process, and that Iran and Syria also came up. After the first Netanyahu session, the department said the two had a "productive, in-depth and wide-ranging conversation" and that Kerry reiterated his commitment to working with all parties to achieve a two-state solution. State Department officials say Kerry will continue to try to find common ground between the two sides that would lead to a resumption of negotiations. On this trip, Kerry is trying to pin down precisely what conditions Abbas and Netanyahu have for resuming talks and perhaps discuss confidence-building measures. A political source told Ynet Thursday, following Kerry's meeting with Netanyahu, that according to intelligence information, Abbas has no real intention of "promoting talks. He's willing to sit down with Netanyahu, but doesn’t intend to go forward with the talks.

"He wants to talk, and then reintroduce Palestinian demands," the source added. "They want to pursue the unilateral track with the UN, with no intention of making any hard or concrete decisions."

At the time, Netanyahu reiterated his stand regarding the danger that a bi-national state poses, a statement that led the political echelon to wonder whether the prime minister is about to stir up a political crisis in his party, as he shifts to a more centralist stand.

A minister told Ynet that Netanyahu was currently making tactical moves. "He understands that he has an opportunity to position himself in the center. It would not be harmful, and with what is happening in the Likud, this is also a good opportunity to show Americans that he is serious about his intentions in the policy. It is not connected to the Likud, it's about Netanyahu – he is looking for an agenda and he doesn’t have a problem to shift to the center."

However, within the Likud, there are those who say that at this point, there is no reason to bring about internal conflict within the party, since "there are no real decisions on the agenda. Everything at the moment is talk.