The death toll in anti-government protests in Egypt rose Friday to five after one man was killed in a brawl that erupted between supporters of Egyptian President Mohamad Morsi in Mansura, in the Delta Nile. In Alexandria, clashes between Egyptian security forces and anti-Morsi protesters left another person dead and at least 36 wounded as protesters pelted stones at the forces who in turn fired tear gas.

The Egyptian daily Al Arahm reported that protesters in Alexandria successfully managed to take over the headquarters the Muslim Brotherhood, the ruling party. And additional reports claimed that a US citizen was the one killed in the city.

The man apparently died from a stab wound to the chest, General Amin Ezzeddin, a senior Alexandria security official said. The account was confirmed by Ibrahim al-Roubi, head of the emergency unit in the Alexandria health department, and two other security officials. Ezzeddin said that the young American was using a mobile phone camera near an office of Morsi's Muslim Brotherhood when it was being attacked by protesters. He was rushed to a military hospital, where he died.

Meanwhile, some an additional 19 people were wounded in clashes between protesters supporting President Morsi and those calling for his resignation in Cairo, while protesters set the party's headquarters on fire after pelting the structure with stones on firebombs. All over the country pro-Morsi supporters rallied, crying "you won't be able to oust Morsi." They gather in front of the famous mosque in the Nasser neighborhood in Cario waving flags, chanting the president's name and calling on opposition protesters to stay at home Sunday, the day marking a year to Morsi's rise to power and which is expected to see mass protests nationwide. Nonetheless, Morsi's detractors decided not to wait until Sunday and in Tahrir square thousands rallied against the president, calling for his resignation and early elections. The protesters burned pictures of Morsi and those of the American embassy in Cairo while shouting: "Morsi, June 30 is your last day." Protesters also gather before the government's main building. Acording to Al Yom Al Masri paper, the protesters even went as far as burring an Israeli flag in response to what they call "Zionist and American involvement in Egyptian affairs." The paper also published a picture of a huge Israeli flag placed next to the building housing the defense ministry a minutes prior to its burning. 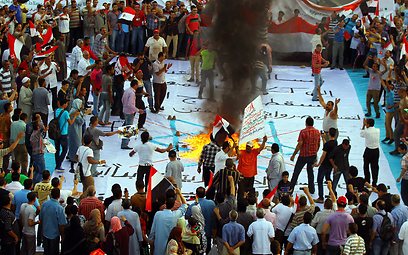 Israeli flag ablaze (Photo: EPA)
Additional reports claimed a small number of protesters also gathered near before the presidential palace. As news of the developments in Egypt spread, the US attempted to defuse tensions all. In "our opinion, all Egyptians have the right to express their opinions and concerns freely. We've urged the government to protect that right," acting deputy State Department spokesperson Patrick Ventrell said.

"We urge all parties to refrain from violence and express their views peacefully. And political leaders have the responsibility of taking steps to ensure that groups do not resort to violence."

His warning came as supporters and opponents of Egyptian Islamist President Mohamed Morsi took to the streets for rival protests a year after his election.

Fervent displays of emotion on both sides underline the bitter divisions sweeping Egypt, with Morsi's opponents accusing him of hijacking the February 2011 revolution and his supporters vowing to defend his legitimacy to the end.

One person was killed and at least 70 injured in second city Alexandria, state media reported.

Ventrell also stressed that Washington did not "support any individual or a particular party in Egypt. We are supportive of the success of all Egyptians."

But he reiterated a US call for the Egyptian government to complete reforms so that it can secure an IMF loan.

"We want the Egyptians to step forward to be able to move forward and have the kind of reforms that are going to put their economy back on track and their political system on track," he told reporters.

The first anniversary of Mohammed Morsi's rule is marked in Egypt by a petition calling for the ouster of the president, who was elected in the wake of the popular uprising that achieved the dethronement of autocratic ruler Hosni Mubarak, garnering some 18 million signatures. The petition is part of the Tamarod campaign, a new protest movement that has revived the spirits of Egypt's secular opposition.

The recent developments are taking place ahead of Sunday's demonstrations, part of the momentum of the Tamarod (Arabic for "rebel") movement. Tamarod activists can be seen on Cairo streets handing out leaflets calling the people to unite and rise again Morsi, whose military is certainly taking the developments seriously enough and are beefing up security of government intuitions and sensitive spots within the Egyptian capital.