'Unless something changes, city will become more extremist, religious and less accepting,' says woman who decided to stay in capital

Tal Shavit, 26, is studying political science at Hebrew University and was looking for a job in Jerusalem for after graduation. She hooked up with “New Spirit,” a non-profit trying to encourage students to stay in the Israeli capital after they graduate and they arranged an internship with Policy, a large lobbying organization.

Even before her four-month internship ended, Policy offered her a job, and Shavit now plans to stay in Jerusalem.

“I wanted to find a way to stay Jerusalem because I don’t really feel at home anywhere else,” Shavit told The Media Line. “Jerusalem is where everything happens. Everywhere else in the country you can avoid issues like the ultra-Orthodox or the Palestinians. Here you can’t avoid it which I think is good.”

Shavit says that she is one of the lucky ones. Many of her friends have left Jerusalem, either because they couldn’t find a job or because the cost of living is too high. She says that helping these students stay is good for Jerusalem. “People are still going to be here for university, but unless something changes Jerusalem is going to keep on getting poorer and cultural and social life will deteriorate,” Tal Shavit said. “The city will become more extremist, religious and less accepting.” 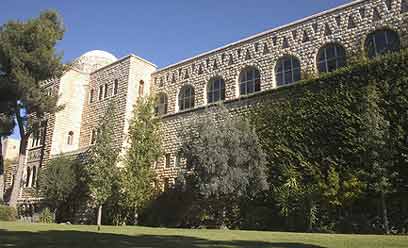 Jerusalem has long been a mecca for students. For example, there are 10 art schools in the city. Yet as soon as they graduated most students left the city. For some it was economic – there is a large shortage of rental housing in Jerusalem and jobs are hard to find. Others said they did not feel comfortable any more in Jerusalem, with its large ultra-Orthodox population.

Many of these students move to the bright lights and big city of Tel Aviv, recently voted one of the best beach destinations in the world by National Geographic. Tel Aviv also has a thriving art and culture scene. Some of them, however, would like to stay in Jerusalem. New Spirit, a non-profit organization formed 10 years ago, is trying to solve the employment and housing issues to enable a critical mass of young, secular Israelis to stay in Jerusalem. Studies show that each year about 7000 more young people leave Jerusalem than come to the city. Elisheva Mazia, the CEO of New Spirit, says that about half of them are young ultra-Orthodox couples who leave Jerusalem for towns built on land that Israel acquired in 1967, where apartments are cheaper than in Jerusalem. The others are the students and young, secular Israelis who the organization wants to keep in the capital. “Beyond housing and jobs, these people want to feel that they have a community here in the city,” she told The Media Line. “We identify young people who can function as social change agents and who have wider circles of influence.” They started an internship program, similar to programs in the US, and now partner with 250 companies. The companies get cheap labor and the students get experience that can also lead to full-time jobs in the city. New Spirit also negotiates with contractors in lower-income neighborhoods to arrange discounts for young families who buy together in a building. “Every year there are about 500 to 600 young people who we deal with and try to get them to stay in Jerusalem,” Mazia said. “Many say they also want a sense of community. By living together, it enables them to stay in Jerusalem.” The two biggest problems to solve for these young people are housing and jobs. New Spirit is trying to push the Jerusalem municipality to build low-cost rental housing for young people. In Jerusalem, as in Tel Aviv, housing prices are high and there is a shortage of rental apartments. Many of those who leave also say that they are running away from the increasingly ultra-Orthodox character of the city. Unlike other cities in Israel, there is no public transportation in Jerusalem on the Sabbath, from sundown Friday to sundown Saturday, and few places of entertainment or restaurants are open. That may however be changing. A new complex called The First Station recently opened at the old train station that used to link Jerusalem with Damascus. In a first for the city, half of the restaurants are open on the Sabbath and the other half, which are kosher, are closed. A new movie complex called Cinema City is slated to open soon. New Spirit is lobbying the mayor to keep the theater open on the Sabbath. “I think that today the policy of the city and the government is changing,” Yakir Segev, a member of the Jerusalem city council and a founder of New Spirit told The Media Line. “Everyone knows we need to invest in young people and they have an important role in the future of the city.” Jerusalem has the lowest tax collection rate in the city, because many ultra-Orthodox and Arab residents of the city either don’t work or earn incomes that are so low they are exempt from taxes. Encouraging these students to stay in Jerusalem will eventually increase the city’s tax base. New Spirit’s annual budget is almost $2 million. About one-third comes from the Israeli government and municipality, and almost half from American Jews. The remainder comes from Israeli donors. Article by Linda Gradstein