In region of 20,000 people, only some 300 openly oppose Assad regime. Many are afraid to speak out, Majdal Shams residents say. Mayor: Divisions not strong enough to turn into violence

Produce seller Nurdean Meri works by himself at Yafri Market in the Golan Heights, where he quietly sells Golan apples, olives, honey, Druze cheese and apple juice in used Coca-Cola bottles. Until two years ago, Meri ran the stall with his cousin, Fteham Azam. But the Syrian war drove them apart.

Azem is known as one of Syrian President Bashar Assad’s biggest supporters in this area where support for the Syrian government runs deep. Meri supports the rebels. “He will never come to my house,” said Azam, 57, who now runs her own stand less than a mile away. She proudly wears a faded white cap of the Syrian flag. 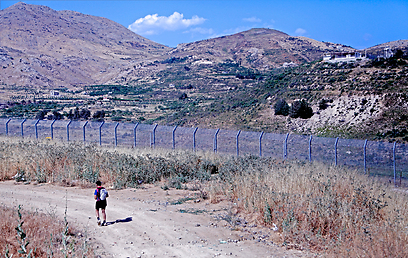 Meri, 68, is one of the relatively few people in Majdal Shams, a small Druze village on the edge of the Israeli-Syrian border - some say maybe 300 in all - who openly oppose the Syrian regime. Boycotted by the other vendors for his support of the Syrian opposition, Meri has little communication with anyone at Yafri Market except for the stream of Israeli tourists who ignore the clash of allegiances in the Golan Heights.

Tensions between Assad supporters and critics in Majdal Shams turned physical at protests last year where members from both sides got into brawls, spat and threw eggs at each other, according to news reports. Opinions on the war continue to sever friendships, families and business ties for the foreseeable future.

Pharmacy owner Ghandi Kahloni, an ardent Assad supporter, says he lost the friendship of five of the town’s doctors and dentists – Assad critics – he studied with at Damascus University.

“We lived together, ate together, slept together,” said Kahloni. But now they refuse to say hello to each other. Being a critic of Assad is inexcusable, Kahloni said from the backroom of his pharmacy, where a television displays Syrian state television news throughout the day.

“That’s my flag,” said Kahloni as the television station showed four split screen images of the Syrian flag. “Only this is my flag,” he said.

In one home, a son and his parents are locked in a two-year war of silence. The son, a critic of Assad, cannot afford his own apartment on his teacher’s salary; he has not spoken with his pro-Assad parents – even though they live under the same roof - since the start of the Syrian war, a neighbor said. The family declined to be interview. But not everyone shuns people who feel differently than they do about Assad, said Mayor Dolann Abu Saleh, who did not think the rifts were strong enough to divide the town. He shrugged off those who boycott each other saying they are part of a minority.

Back at Yafri Market, Meri does not think the tensions will turn violent this year. But even still, the rift between Meri and Azam, like other rifts in Majdal Shams will be difficult to repair as the Syrian war wages onwards.

“They are traitors to the country,” said Azam who does not expect to speak with her cousin and other critics of Assad even after the war is over.