The minibus travels along a bumpy road through Palestinian neighborhoods of east Jerusalem. The roads are narrow and poorly paved.

“You are seeing Israel’s ongoing neglect of these Palestinian neighborhoods for more than four decades,” Yaniv Mazor tells the 15 journalism students from five nations. “Most of these neighborhoods have no sidewalks and no garbage collection. They pay taxes but do not get any municipal services.”

A few minutes later, the bus stops at a large gray concrete wall, a manifestation of the controversial security barrier that Israel has erected in and around the West Bank. The students rush to snap photos of the structure, decorated with anti-Israel graffiti, before the pony-tailed Mazor corrals them together in the shade.

“In 2003, Israel began construction of this barrier to improve security by stopping suicide bombings,” he tells them. “But for many Palestinians it means they can’t access their land without a permit.” The students are spending the morning touring around Jerusalem with Ir Amim, a dovish organization that opposes the barrier. Later the same week, they’ll go to an army base and to the southern Israeli town of Sderot, which has been hit by thousands of rockets fired from the Gaza Strip. Also on the agenda is a trip to the West Bank town of Hebron where the students will meet with both members of the Jewish and Palestinian communities. 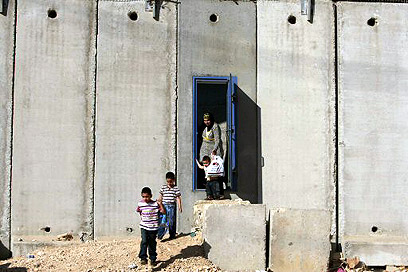 The program is sponsored by ieiMedia, which brings journalism students and young journalists to Italy, Ireland, and Turkey. For the first time, the program is being held in Jerusalem, in partnership with Hebrew University.

“Jerusalem is a news hot spot,” Rachele Kanigel, director of the Jerusalem program told The Media Line. “This is where it’s happening. Many of our students want to become foreign correspondents and want to work in the Middle East. Just setting up shop in the Middle East might be scary but a program like ours gives the students the experience of working as a foreign correspondent with support.” Some of the students, like Annie Claire Bergeron-Oliver are already working journalists. She is a parliamentary reporter for ipolitics.com in Ottawa, Canada, and has taken a leave of absence to attend the month-long program. “I came to learn more about Israel and specifically the Palestinian-Israeli conflict,” Bergeron-Oliver told The Media Line. “Living in Canada we’ve only heard one side of the story which is the American perspective and I was looking to see a different side. The other day I was in the West Bank and I felt I understood a little bit more about what Palestinians face on a day-to-day basis.” Others say it is an opportunity to learn about a new part of the world. “I’ve always wanted to come to the Middle East,” Brandon Desiderio, a student at Pennsylvania’s Cabrini College told The Media Line. “It’s such an interesting mix of culture and diversity here. I definitely want to live overseas in some capacity but I’m still not sure if I want to be a journalist or work in economic development.” The $5000 cost of the program (not including airfare) is steep for some. Desiderio says he cobbled together scholarship money, savings and help from his parents to make the trip. The students are housed in the dormitories at Hebrew University. While most are American and Canadian, one participant is from Turkey and one is originally Nigerian. “I’m the only non-native speaker in the program, so it’s a little challenging,” Hazal Sipahi, a journalism student from Istanbul told The Media Line. “I’ve never done news gathering or writing in English. I also sometimes don’t get the jokes that the other students make.” Sola DaSilva, who moved to Canada after finishing high school in Nigeria, says she studied criminology in college but now wants to become a journalist. She said Israel has surprised her in many ways. “In North America, you get the impression that Israel is very secular; but at least in Jerusalem, it’s deeply religious,” DaSilva told The Media Line said. Her biggest frustration, she says, is not having enough time to do reporting. Each student will work on a final project. Da Silva wants to look at east Jerusalem Palestinians who are considering taking Israeli citizenship. Bergeron-Oliver wants to look at overcrowding in Palestinian refugee camps. Another student is doing a photo essay about Israeli female combat soldiers. Program director Kanigel says it wasn’t easy to get the program started in Jerusalem. San Francisco State College, where she teaches, had a ten-year ban on any study abroad program in Israel because of the security situation. That ban is just being lifted now. In November, when Israel and Hamas fought a mini-war in Gaza, Kanigel thought she might have to cancel the program. “What has surprised and touched me the most is how friendly and willing people are to embrace us,” she told The Media Line. “We’ve gotten such a warm welcome and it’s been interesting and satisfying how much people are willing to help our students.” Article by Linda Gradstein