While the world's eyes are fixed on Syria and Egypt, Prime Minister Benjamin Netanyahu is trying to push Iran's nuclear program back into the lime light.

"A month has passed since elections were held in Iran, and Iran continues to race toward the development of military nuclear capability," Prime Minister Benjamin Netanyahu told the weekly cabinet meeting on Sunday.

The PM said that under President-Elect Hassan Rohani's leadership Iran is "expanding and perfecting its (uranium) enrichment while simultaneously developing a plutonium reactor to produce material for a nuclear bomb. 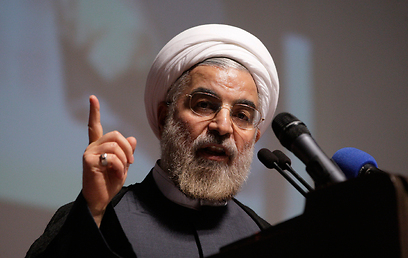 In an interview to CBS's Face the Nation, the prime minister said that he is resolved to block the Islamic Republic from actualizing its nuclear program. According to him, Iran is inching "closer and closer to the bomb," and "I won't wait until it's too late."

"They're edging up to the red line," the prime minster said. "They haven't crossed it yet. They're also building faster centrifuges that would enable them to jump the line, so to speak, at a much faster rate – that is, within a few weeks."

Netanyahu elaborated the point and said: "They're building intercontinental ballistic missiles to reach the American mainland within a few years," he said. "They don't need these missiles to reach us. They already have missiles that can reach us. (Hence) our clocks are ticking at a different pace… We're closer than the United States; we're more vulnerable. And therefore, we'll have to address this question of how to stop Iran, perhaps before the United States does."

Netanyahu further commented on the difference on opinion between US and Israeli policy in regards to Iran saying: "We've spoken many times, President Obama and I, about the need to prevent Iran from getting nuclear weapons," he said.

"I know that is the US policy. What is important is to convey to them, especially after the election, that that (Iranian) policy will not change."

"At the same time, Iran is also developing its ballistic missile force. These (developments) threaten not only us, but the entire West. We are determined to stand behind our demands, which must also be the demands of the international community," Netanyahu told his ministers.

The Israeli premier went on to list the demands from Iran: "Stop all uranium production, remove all enriched material (from the country) and close the illegal nuclear facility in Qom.

"We believe that now more than ever, in light of Iran's progress, it is important (that the international community) tighten the economic sanctions and make Iran face a credible military option," the PM said.

A Pentagon report stated that China, Iran and North Korea are aggressively developing nuclear missiles capable of striking the United States and proliferation among these nations of technology is rife, the British newspaper Daily Mail reported over the weekend.

The Department of Defense report, the findings of which were first published by the Washington Times, confirms the assessment of US intelligence agencies that Iran is set to test an intercontinental ballistic missile as early as 2015.