ISTANBUL – Turkish journalists today marked the 105th anniversary of the cancellation of censorship. Until 1908, all papers were inspected by Ottoman officials before being printed. Yet, the Turkish media still has a long way to go before it can be called a free press.

Turkey imprisons the largest number of journalists in the world, according to the Committee to Protect Journalists, which says at least 49 journalists were imprisoned in 2012. The claim against those imprisoned is never tied directly to their articles, but rather based on accusations of ties to illegal organizations.

These pressures have their impact on the Turkish media, a colorful collection of 36 radio stations, 23 TV stations and 37 newspapers that publish nationwide. Those numbers rise to 252 TV stations and 1090 radio stations when local media are included. There are also dozens of local newspapers printed around the country. Nonetheless, despite the numbers, the mainstream media are becoming increasingly pro-government and the alternative media struggle to exist, according to journalists and experts on the issue.

Turkish media tycoons' ownership of many of the media outlets is one of the major obstacles to a free press. Ceren Sozeri, a researcher at Istanbul's Galatasaray University, explained that many media owners have other investments in many sectors and are in the news business not to make a profit, but to support their other holdings.

"Since most media companies are losing money, the media owners neither protect the qualified journalists nor care about a quality journalist who meets Turkish society's expectations," she told The Media Line.

However it's business considerations and not fear of the government that influences the press. Deniz Ergurel, General Secretary for the Media Association, an institution where members of media organs more sympathetic to the government gather, believes there is no need to look for conspiracy theories, insisting that the Justice and Development Party (AKP) does not tell the media what to do and not do. 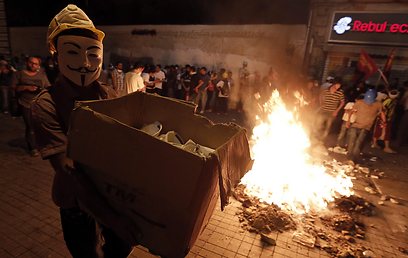 "Each media group has its own interests and expectations of its audience" which dictate their editorial preferences, he said. Nevertheless, he argues that the owners' other business dealings may influence the reporting.

"We know some media bosses have business relationships with the government; it's not a secret. These bosses make editorial decisions to protect their interests, which unfortunately may result in ignoring some news and exaggerating others," he told The Media Line. Sozeri said the Turkish public turned away from the mainstream media recently, especially after the nationwide social unrest which began in Istanbul's Gezi Park in May. News channels were broadcasting unrelated shows while the protesters were clashing with the police right outside their window. The CNNTurk's broadcast of a penguin documentary on one of the more violent days made the penguin a symbol of censorship in Turkey. Turks including some of the journalists turned to the social media instead for what they saw as more objective newscasts. In previous decades, before the ruling AKP ended the army's systematic control of politics known as the "military tutorship" a few years ago, the media maintained a balance between the General Staff and the coalition parties, but today they acquiesce to the government unconditionally, she told The Media Line. 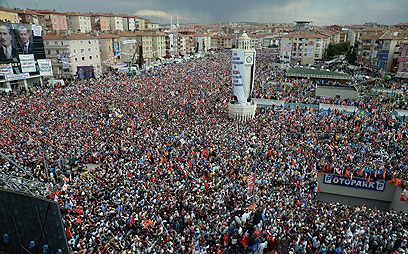 As an example, she noted the Uludere incident in December 2011, when Turkish jets bombed a party of Kurdish smugglers and killed 24. The Turkish media failed to report this for about 17 hours, fearing government retaliation.

Audience expectations from a particular media outlet also play an important role in press objectivity, or the lack of it. "When you buy a newspaper like the daily "Sozcu" (an anti-government newspaper) you cannot read any pro-government news because that is what their readership expects. Conversely, do newspapers like the (radical Islamist) daily "Yeni Akit" publish speculative stories that their readers would like? They do," she added. "'Sozcu,' arguably the AKP's fiercest adversary in the print media and one of the dailies with the highest circulation here, shows there is no censorship in the traditional sense in Turkey, Ergurel adds. "At least 10 dailies published in Turkey are totally against the government. You can add TV stations Halk TV and Ulusal Kanal to those. I believe their existence points to the level of democratic maturity Turkey has reached," he told The Media Line. Columnist Kadri Gursel, who also is the chairwoman of the International Press Institute's Turkish National Committee and a contributing writer to the "Al Monitor" website and the daily "Milliyet" disagreed with the notion that the very existence of media organs like "Sozcu" proves there is no censorship or government interference. "It is not possible to answer such a question so easily," he said. "However there is great pressure on the media which results in censorship, manifested in political pressure on the bosses, rather than by law," Gursel said. He sees the Turkish media as falling into two main groups: "the government's media and the media that the government oppresses." The messages sent to the media bosses from the government are very clear when you look at the results, he said, adding, "Proving this, however, will only be possible in the future when memoirs will be written and some records exposed. Today we can prove only the self-censorship angle of this." Unlike the alleged government censorship, self-censorship in the Turkish media today is undeniable, said Gursel. "The basic instinct in the newsrooms of the mainstream media is not journalistic, because it has been replaced by the instinct of self-censorship," he said. The mainstream media consider whether every story would hurt the AKP's interests and if it would, what the government's reaction would be, Gursel argued. Journalists as individuals are aware that if they are fired from one media organ for doing something against the government and news of this is publicized, they cannot work any place else. The independent media are the only ones who would hire them, he said. Job security is another problem for Turkish journalists and freedom of the press in Turkey, as head of the Journalists' Union of Turkey Ercan Ipekci pointed out. There are 100,000 registered employees in the Turkish media, he said, adding that there are at least half as many working illegally. "The laws make unionization harder," he said. "Besides, membership in unions is a dangerous thing in Turkey since it is punishable by dismissal." Then there is the imprisonment of journalists. Asked about this by The Media Line, the Justice Ministry responded by repeating a declaration made on the matter in May: "The Justice Ministry is not an institution to evaluate the Turkish people by their identities or the professions they practice. The ministry makes evaluations based on the verdicts of the related courts or the indictments prepared by the prosecutors' office." The ministry declaration recalled the situation of Hasan Biber, who allegedly threw hand grenades at the ministry building in March, according to security camera recordings, and who is currently on the run. Biber is a published writer and a ship port union member, according to the ministry, whose spokesman asked, "Now if this person gets caught and arrested, will it be said that a 'writer' and 'union member' was arrested?" Almost all of journalists arrested are either tried for or convicted of ties to illegal organizations. The government's not considering them journalists but terrorists is only "normal," Gursel said. "No regime with authoritarian tendencies arrests journalists simply for their being journalists; the prosecutors always find another excuse. The excuse in Turkey is being a member of a terrorist organization." When applied to journalism, the government's definition of terrorism is "practicing journalism with an advocatory and selective agenda, or "portraying an anti-government or anti-regime profile," according to Gursel. IErgurel said this can only be stopped if Turkey's constitution is amended, along with related laws to provide more freedom of expression and the press. Article written by Ozgur Ogret