Influx of Syrian refugees into Lebanon has raised country's population by fifth, as hundreds, if not thousands, flood into country daily, joining Palestinians in makeshift camps. UN, aid officials try to balance need to improve conditions, desire refugees will leave once conflict resolves

They're lightweight, easy to assemble and have covers that are supposed to keep you cool in the summer and warm in the winter. The UN refugee agency wants to test these individual housing units with an eye toward using them as shelter for Syrians fleeing their country's civil war. But the plan is meeting stiff resistance from Lebanese officials, who fear that elevating living conditions for Syrian refugees ever so slightly will discourage them from returning home once the fighting ends. That frustrates aid organizations who are desperately trying to manage the massive refugee presence across the country.

Lebanon's refusal to set up any kind of organized accommodation for tens of thousands of Syrians – including refugee camps or government-sanctioned tent sites – is a reflection of its own civil war demons. It underlines the nation's deep seated fear of a repeat of the 1975-1990 war, for which many Lebanese at least partly blame Palestinian refugees. 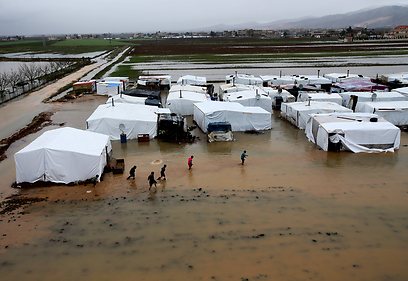 Official:1.2 million Syrians now in Lebanon (Photo: AP)
Many regard the Syrians with suspicion and are worried that the refugees, most of them Sunni Muslims, would stay in the country permanently, upsetting Lebanon's delicate sectarian balance and re-igniting the country's explosive mix of Christian and Muslim sects. "It's the fear of everything permanent, or semi-permanent, because of the Palestinian experience in Lebanon," said Makram Maleeb, a program manager for a Syrian refugee crisis unit at Lebanon's Ministry for Social Affairs. "Any move toward a camp situation is quite worrisome because it suggests a permanent situation for the refugees," he told The Associated Press. Palestinians living in Arab countries – including the 450,000 in Lebanon – are descendants of the hundreds of thousands who fled or were driven from their homes in the war that followed Israel's creation in 1948.

They remain in Lebanon's 12 refugee camps because Israel and the Palestinians have never reached a deal that would enable them to return to their homes that are now in Israel. 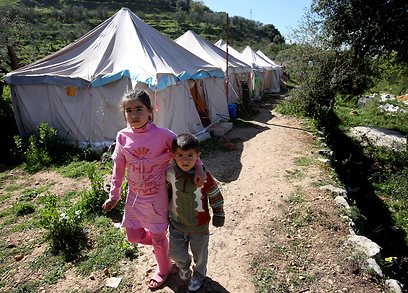 The civil war in Syria, now in its third year, has killed more than 100,000 people and uprooted millions from their homes. Many fled to Iraq, Turkey, Jordan and Lebanon, a short drive away from the capital, Damascus.

On any given day in Lebanon, hundreds, sometimes thousands, of refugees arrive in cars loaded with children and belongings. Their presence has swelled the country's population of 4.5 million by a fifth. It's an astounding statistic for the tiny country and represents the highest number of refugees per capita of any country in the region.

Officials say an estimated 1.2 million Syrians are now in Lebanon – including some 620,000 registered refugees. Most arrived over the past eight months.

With the government providing none of the facilities and land that authorities in Turkey, Jordan and Iraq have allocated for the refugees, many Syrians in Lebanon live in appalling conditions, finding shelter in slums, tents and tin shacks strung with laundry lines and wedged between farm lands outside towns and cities.

On a casual walk in Beirut, one finds Syrians sheltering in underground parking lots, under bridges and old construction sites with no running water, sanitation, electricity or protection from Lebanon's sizzling summers and its freezing winters. "The kids get sick all the time here," said Raghda, a 48-year-old mother of eight, living in an abandoned police station in the eastern Lebanese town of Majdal Anjar, along with 21 other relatives. They are crammed into three rooms without proper sanitation or clean water. About 10 percent of the refugees are accommodated in unfinished private houses, and others live in garages, shops and collective shelters, according to the UNHCR. Most of them – over 80 percent – rent accommodation that costs more than $200 a month on average. Lebanese officials say they are aware of the magnitude of the crisis, the health risks involved and the possibility that deepening resentment of refugees among the hosting population could turn into an armed conflict inside Lebanon as the civil war drags on in Syria. Still, they insist the government will not approve any plans for setting up refugee camps or sanction erecting any kind of structure specifically designed to accommodate refugee families on Lebanese soil no matter who designs it and who pays for it. "It's distressing and everyone is feeling anxious, wondering if they will ever go back as the fighting goes on and on and on," Maleeb said. Still, he said it was unlikely the housing unit would be approved. Ninette Kelley, UNHCR representative in Lebanon, said the refugees "desperately want to return home." But having people live in appalling conditions will not force them out of Lebanon before the fighting stops in Syria, she said. "'There is this psychological worry that if people are put in a semi-permanent structure, they will never leave," Kelley told the AP. They will leave, she said, adding that one of the greatest impediments of going home after the fighting ends is not having a place to live in Syria. The 17.5-square-meter (yard) refugee housing unit would offer a family of five a "more dignified life in exile," said Kamel Deriche, UNHCR's operations manager in Lebanon, and enables refugees to dismantle it, pack it and carry it home to reuse as a temporary accommodation until their family home is rebuilt. Compared to a tent, which has to be replaced every three to four years, the unit's life span is expected to be up to seven years. And the price of about $1,000 per unit makes it more economical, Deriche said. "It's not a permanent structure and we are not establishing camps by any stretch of the imagination," Kelley said, adding that the unit would be only one of several shelter options for the agency to use. A prototype of the prefabricated house designed by the Swedish furniture manufacturer IKEA has been sitting in the front yard of UNHCR's Beirut headquarters for a month. The agency has been lobbying Lebanese officials for permission to try out 15 units over a period of six months before they can be deployed, but so far to no avail. UNHCR also intends to test the units in climate conditions of northern Iraq and in Ethiopia, Deriche said. Lebanese officials say the historic connotation of a tent for refugees, let alone a housing unit, weighs heavy on the nation that is still reeling from the devastating 15-year civil war. The Syrian fighting has frequently spilled over into Lebanon over the past two years, deepening tensions between pro- and anti-Syrian politicians, who have been unable to form a new government since the prime minister resigned in March. "There will be no camps and family shelters, wooden or pre-fabricated, whatsoever in Lebanon," said Maleeb, the government official.

Anything to do with the Syrian refugees, he added, is "a big political decision, and one that cannot be taken by a caretaker government."