Fadl Shaker, one of Arab world's most famous singers, becomes radical Sunni, wanted for death of 17 soldiers in clashes in Sidon

Once adored by women for his warm voice and good looks, Lebanese crooner Fadl Shaker followed an unlikely path to become an Islamist militant now on the run with fellow fugitive Sheikh Ahmad al-Assir. The pair are now being sought in a nationwide manhunt after clashes between Assir and his Salafist supporters and the military in the southern city of Sidon left 17 soldiers dead.

Though he grew to become one of the Arab world's most famous singers, Shaker suffered through a miserable childhood of poverty, which a onetime musician friend says helped lead him down a dark path later in life. 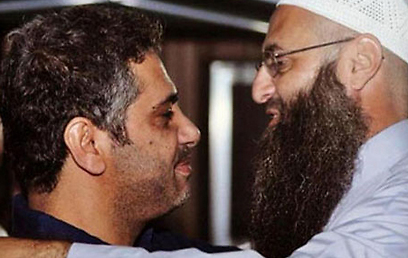 Now in his mid-forties, Shaker was born to a Palestinian mother and Lebanese father in the country's biggest Palestinian refugee camp, Ain al-Helweh.

Born Fadl Shmandur, he began his career as a popular wedding singer who performed from the rooftops of the camp, an over-crowded and hopeless place. "He has a beautiful voice. Hearing him live was even more beautiful than a recording," a former friend of Shaker's told AFP on condition of anonymity.

"But he has always been naive and gullible. The more of a star he became, the further he strayed from the people who really loved him. He constantly ended up in bad company," said the friend, who lost touch with him some years ago.

In his prime, Shaker sang love songs that were instant region-wide hits. He released his first album in the late nineties, and continued to perform until 2011.

His biggest hits, Bayyaa al-Qulub (The Heartbreaker), Ya Ghayeb (You who are far away) and Law Ala Albi (My heart melted in your love), are regularly played at Arab weddings and parties.

Shaker's songs are romantic and his voice full of longing. "He is a very sensitive, extremely reserved person," said Shaker's friend.

"When his Palestinian wife left him, he would cry on stage as he sang, thinking of her. He is very emotional." In one of his most well-known songs, he sang: "O you who are far away, why don't you ask after the one who loves you, and who can't sleep at night? I am thinking of you." Shaker's immense popularity was boosted by the fact he was also a defender of Palestinian rights, and was granted honorary Palestinian citizenship by President Mahmoud Abbas . Shaker also opened a restaurant in Sidon and pondered swapping his music career for a less hectic life, closer to his three children. "I knew he would leave music one day, but I would never have thought he would join Assir. It's such a shame, he has such talent. I feel sorry for him," his friend told AFP.

Shaker's brother had long been a strict Muslim, and he tried for years to convince him to leave music.

But it wasn't until after the outbreak of an uprising in Syria against President Bashar Assad that Shaker became convinced that singing is haram, or forbidden in Islam.

Shaker soon became the best-known face of Assir's small movement of openly sectarian, Sunni radicals and praised the cleric as "the lion of the Sunnis".

He grew a beard and became a highlight of Assir's rallies, helping attract attention to the phenomenon of Sunni radicalism in the small Mediterranean country.

Performing during a television interview earlier this year, Shaker swapped his love songs for a chant about jihad (holy war) and death.

Sitting by Assir, Shaker smiled and sang as sweetly as ever: "God gave me the gift and invited me to join the jihad... Mother, don't cry for me... Death does not frighten me, and my wish is to become a martyr."

His latest media appearance came in an amateur video in which he boasts: "We got rid of two of your swine, of your dogs... God is great."

'We got rid of two of your swine'

The video went viral, with many alleging Shaker referred to killing army troops. Others said the footage referred to earlier clashes between Assir supporters and pro-Hezbollah fighters.

Lebanon's judicial authorities issued a detention order for Assir and 123 of his supporters, including Shaker, whose brother was killed in weekend clashes with the army in Sidon.

"Fadl's story makes me sad, but in a way I am not surprised. He has always been easy to manipulate," his friend told AFP.

"These people have used him. Without him, no one would have heard of them."