While the Egyptian army is destroying the underground tunnels used to smuggle goods and arms into the Gaza Strip, Israel is preparing to significantly increase its supply of food, fuel and construction material to the Hamas-controlled coastal enclave.

A security official said Monday that "economic pressure is evident and prices have increased" in Gaza after the Egyptian army destroyed 80% of the tunnels over the past few weeks.

Cairo moved to close the tunnels after terrorists in the Egyptian Sinai desert killed 16 of its soldiers a year ago. Egypt said some of the gunmen had slipped into the Sinai peninsula from nearby Gaza, an accusation denied by the Islamist Hamas authorities. 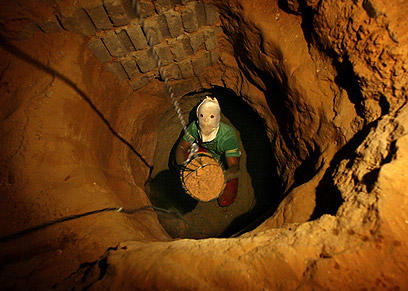 The tunnel crackdown has gathered pace since the Egyptian military removed Islamist President Mohamed Morsi from power earlier this month. Morsi's short-lived rule had already disappointed Hamas, since despite their shared ideology he appeared to be in no rush to open the Gaza border.

The security official said that in the weeks after Morsi's ouster, Israel increased the number of trucks carrying supplies to Gaza from an average of 250 a day to some 280. "There is no humanitarian crisis in Gaza, but we are preparing to expand the transfer of aid," he said. "The cheap fuel is still being transferred to Gaza from Sinai, but only partially, so we are preparing to (increase the supply of fuel) as well." Prior to the recent revolt in Egypt, Hamas refused to accept fuel from Israel because the taxes collected from the smugglers were a major source of income for the Strip's Islamist rulers. However, private Palestinian elements, including gas stations, have already placed orders with Israeli companies.

The security official said the wide-scale Egyptian operation to destroy the smuggling tunnels proves this was possible beforehand. Despite intense pressure from Cairo, Hamas is still adhering to the agreements reached following Operation Pillar of Defense. The two most recent rocket attacks on Israel were orchestrated by terrorists belonging to a rebellious group comprised of former Islamic Jihad operatives.