WASHINGTON – US Secretary of State John Kerry joined Palestinian and Israeli negotiators on Tuesday to close out the initial round of negotiations and release a statement detailing any progress. US officials sought to dampen expectations, saying Kerry might say only that the two sides had agreed to meet again.

The secretary of state added that meetings thus far have been constructive and that further meetings in Israel or the territories over the nest two weeks will focus on "core issues" in bid to "end the conflict."

The United States will continue to work with both parties, Kerry noted, stressing that the "two states deserve countries to call their own" and that "the time has come for a lasting peace."

He stressed that Israel is to take a number of steps in the coming days to improve conditions in the West Bank.

Palestinian negotiator Saeb Erekat thanked Kerry and the Israeli government for opening a hatch to peace talks; "The Palestinians have suffered enough," he said, noting that he is delighted that all core issues are on the table and that it is time that Palestinian and Israelis will live in peace.

Israeli negotiator, Justice Minister Tzipi Livni, thanked US President Obama and Mahmoud Abbas, saying, "A new opportunity has been created for us." 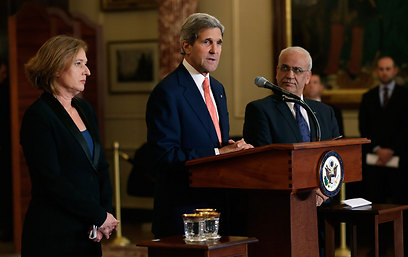 Livni expressed hope that the peace talks will result in a long and lasting peace. "History is not made by cynics; it is made by realists who are not afraid," she said.

A second round is likely to be held in the region in the coming two weeks and would be overseen by Martin Indyk, the new US special envoy for Israeli-Palestinian peace talks, the officials said. The parties have agreed to negotiate for a minimum of nine months.

In announcing Indyk's appointment before the talks, Kerry urged both sides to make "reasonable compromises" on the most serious issues that divide them.

Kerry spent six months of furious shuttle diplomacy in an effort to restart the negotiations that broke down in 2008. An attempt to restart them in 2010 failed after a single day. And before that, scores of diplomats have failed to broker peace for decades. After five years of stalemate, there has been a flurry of activity in recent days to set the stage for the talks that all sides agree will be protracted and difficult.

The Israeli side is led by chief negotiator Tzipi Livni , a former foreign minister who was active in the George W. Bush administration's ill-fated peace talks with the Palestinians in Annapolis, Maryland, and Yitzhak Molcho, a veteran adviser to Netanyahu who was part of the Israeli team involved in Obama's two previous attempts to broker negotiations.

The Palestinian team is led by chief negotiator Saeb Erekat and President Mahmoud Abbas' adviser, Mohammed Shtayyeh, both of whom have been major players in failed negotiations with the Israelis since 1991.

Earlier on Tuesday, US President Barack Obama met with the lead negotiators.