A couple from Jerusalem that visited the monument in memory of the fallen soldiers who died during the 1997 helicopter disaster near reported to have witnessed two haredi families playing in the monument's pond.

"My wife and I were passing near She'ar Yashuv and I wanted to show her the new monument for the helicopter disaster. We went in and we saw the memorial pond, which is part of the monument, with the names of the 73 fallen soldiers engraved, and in it kids spraying water as if it were the local swimming pool," said Ido Ben Porath. 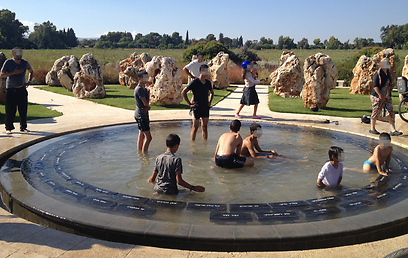 "We came closer and saw a group of two haredi families… there were little children in there, boys and fathers, and they were all running around as if it were a water park." Ben Porath added that he and his wife, as well as another passerby, went over to the families and asked "'Do you know where you are?' I wanted to tell them that helicopters crashed here, but I quickly realized they were well aware of where they were and realized it was a monument. "We mentioned respect, memory, loss – but they wouldn’t listen. They said they would do whatever they wanted. The haredi father said, 'we pay taxes, we can do whatever we want.'"

In 1997, two Sikorsky CH 53 helicopters crashed over Kibbutz She'ar Yashuv in northern Israel, claiming the lives of 73 soldiers and officers.