A Palestinian flag in the Knesset part of cautious optimism due to renewed negotiations: On the backdrop of the end of the first round of talks between Israel and the Palestinians, Wednesday morning, history was made in the Knesset when a delegation of senior Palestinian officials met in the Israeli parliament with ministers and MKs who support resolving the Israeli-Palestinian conflict.

Present at the meeting were ministers Yael German (Yesh Atid) and Amir Peretz (Hatnua); Muhammad Madani, a member of Fatah's central committee; and head of the Lobby for the Promotion of a Solution of the Israeli-Arab Conflict, MK Hilik Bar (Labor), and they were moved by the placement of the Palestinian flag next to the flag of Israel.

Bar, who initiated the meeting with the organizations One Voice and The Negev Institute for Strategies of Peace and Development, noted that it was not something usually seen, but he expressed the hope that in the future, "the two countries' flags seen side-by-side would be natural". 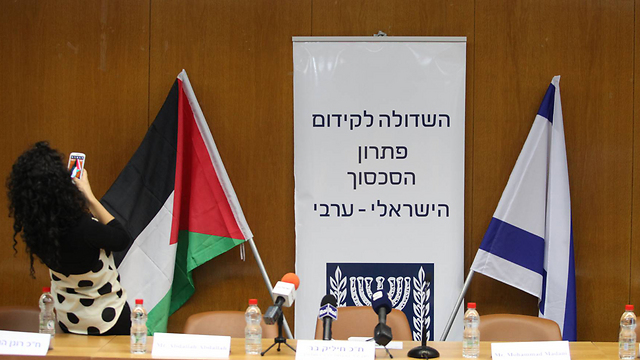 The meeting between the two parties had been planned ahead of time, and garnered attention due to its timing at the end of the first round of talks in Washington. All participants, including 33 ministers and Knesset members, welcomed the resumption of negotiations between the parties. Fatah member Madani opened the meeting by stressing that the initiative to establish a body that adopts the option of a two-state solution is very important. He noted that the goal of establishing a Palestinian team that comes to meet with Israelis was to expose the Israeli public directly to the Palestinian views.

Madani referred to the talks in Washington and said that the Palestinians were optimistic with their renewal. "There is a need to work together for the negotiations to succeed because it is probably the last chance for a two-state solution within the 1967 borders." He expressed the desire of the Palestinian delegation, which included senior Fatah officials and businessmen, to "find new horizons to advance this goal and reach the heart of Israeli society." 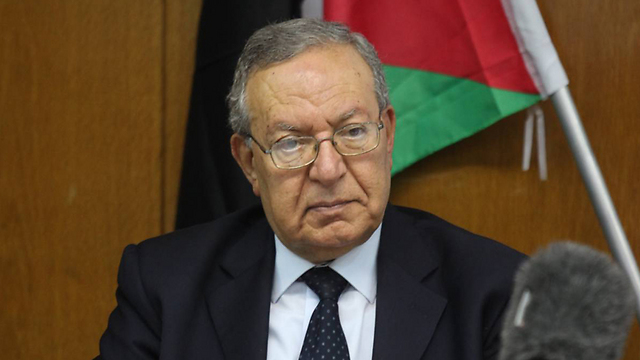 Abdullah Abdullah, Chairman of the Political Committee of the Palestinian Legislative Council, said that the most important function of the delegates in both parties was to gain popular support for the negotiations. 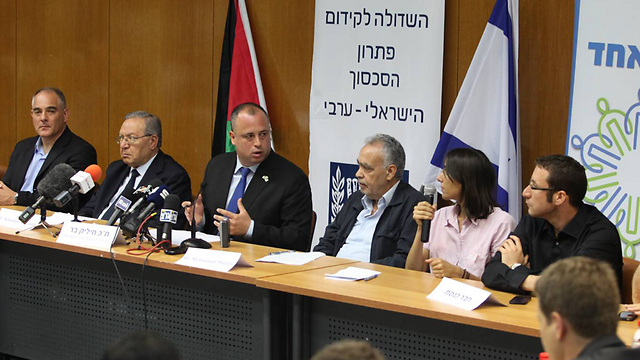 The former Minister for Prisoner Affairs Ashraf Ajrami, who has frequently participated in various public events in Israel, said that Abbas had a genuine desire for peace, despite the opposition and problems from within and outside the PLO regarding the political process with Israel. He said that to him, this is a bold step. 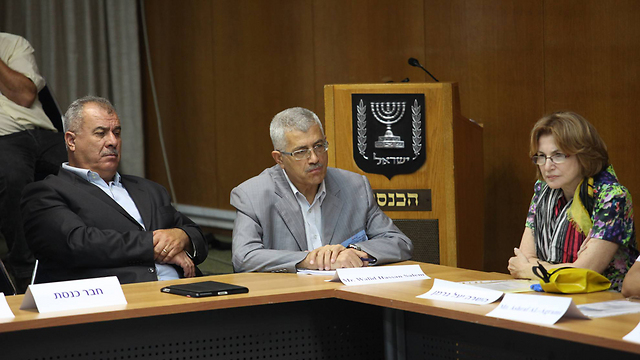