Report by National Insurance Institute shows by 2024, Institute’s actuarial reserve fund will decrease, within 18 years, will reach zero. NII warns if steps not taken, will have to reduce all benefits by 10%

The National Insurance Institute (NII) released a report Thursday warning that unless preventative measures are taken, social security retirement benefits are expected to run out within three decades.

According to the NII, social security payments to the public are expected to grow faster than deposits into the reserve, resulting in the decrease of the actuarial reserve fund of the institution, managed by the Bank of Israel. By 2042, the institute stressed, the reserve is expected to reach a zero balance and National Insurance will be in deficit.

This means, the NII warns, that the institution will be able to pay the public only part of the benefits to which they are entitled.

The report is based on the population of Israel today and the forecast for population growth for the next 75-years, according to Central Bureau of Statistic estimations for the growth of different population segments. 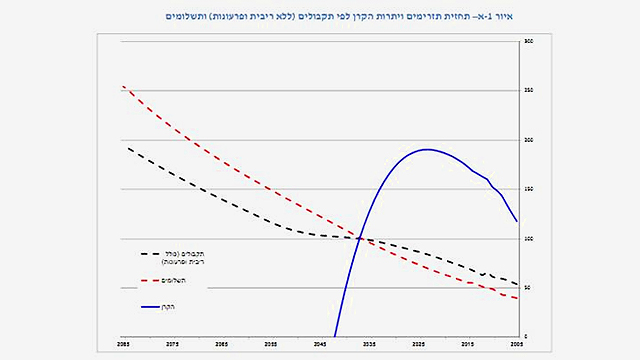 The National Insurance Institute noted that the main conclusions of the report are that now is the time to take steps to moderate cash flow and delay the anticipated deficit. These steps entail a combination of measures including raising premium rates to grow national insurance receipts, as well as raising the retirement age.

The NII warned that if these steps are not taken, all benefits will have to be reduced by 10%, in order for the institution to meet its obligations to the public.

The Minister of Welfare and Social Services, Meir Cohen, said "The conclusions of the actuarial report which I received today support the opinion that we must adopt the (findings) of the Institute’s financial solidity report, a report will ensure the social stability of the State of Israel and the ability to pay pensions over time.”

NII Director General Shlomo Mor-Yosef added," The actuarial report is a warning to Israel. If today we take small, moderate measures to improve existing circumstances, in the future we will avoid drastic measures that may damage the living standards of welfare recipients."