Ominous Hebrew banner hoisted ahead of Al-Quds Day events, marking solidarity with Palestinians; Nasrallah: We have score of vengeance with Israelis

Ahead of Al-Quds Day held on Friday, Hezbollah hung a large banner in front of the Israeli border reading, in Hebrew and Arabic, "We're coming."

Next to the inscription, the banner was adorned with an image of the Al-Aqsa Mosque.

Al-Quds Day is commemorated in several Arab and Muslim countries since its introduction by the Iranian Ayatollah Khomeini in 1979, and is meant to express solidarity with the Palestinian cause, oppose Zionism as well as Israel's control of Jerusalem, Quds in Arabic. 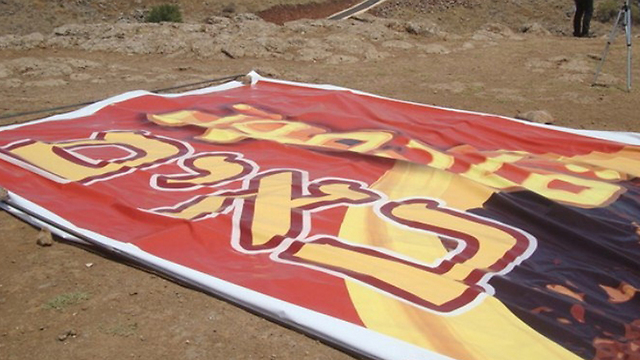 The Lebanese newspaper al-Akhbar, affiliated with Hezbollah, reported this week that the organization is planning to hold a ceremony marking the holiday in the hill where the banner was hoisted.

After the ceremony, said the report, the participants will hold Friday's prayer on Fatima Gate, a former border crossing between Israel and Lebanon.

A source affiliated with the Shiite group said that similar banners will be hoisted in the area.

The main Hezbollah event marking Al-Quds Day will be held in Beirut. In a televised speech on Thursday, Hezbollah leader Hassan Nasrallah, who is expected to give a speech on Friday as well, has urged the populace to attend.

"We need this year, more than any previous year, for attendance to be significant," Nasrallah said.

"Because of the Second Lebanon War there is a large score of historic vengeance between us and the Israelis lurking for us, for our leaders, our men, our presence and our entity, as they have harmed Imad Mughniyeh and others."

Meanwhile, Lebanese President Michel Suleiman said in a speech that "It's time for Hezbollah's use of weapons to be subject to a state decision, especially after the group's weapons crossed the borders to benefit the Syrian regime."

Suleiman has called Hezbollah in the past to cease its involvement in the Syrian civil war.