Some 450 Olim arrive this week from France, England. ‘We preferred leaving,’ says one immigrant from France, ‘We feel we’re home’

Many French citizens have traveled in Israel as part of their annual holiday, but this week a few hundred of them landed at Ben Gurion Airport – forever. Three flights arrived from Paris and another one made its way from Marseilles. On the aircraft were new immigrants who said they were fulfilling a dream

"I feel I’ve arrived home, making aliyah is a dream come true," said Sabrina Kozirov, 40, who came from France with her husband and two teenage daughters. "We made aliyah mainly for the girls. We want to be educated here among Jews and Israelis," she explained. "We’re crazy about Israel and connected to the state and to Judaism. Our place is here," she said excitedly. 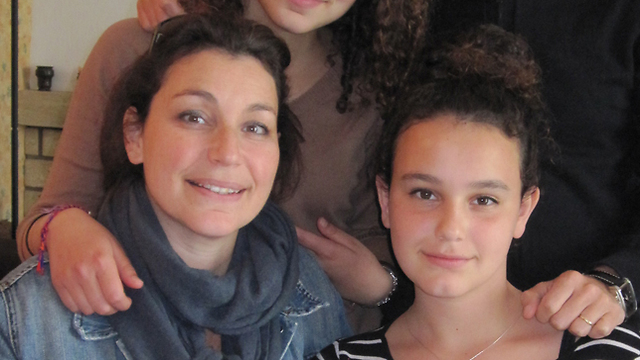 The newcomers will be integrated into communities across the country, and into programs run by the Jewish Agency. Recent data provided by the agency shows that by the end of the year, it is expected that the total number of immigrants from France will reach about 2,500 people – an increase of 40% compared to the previous year's number.

Embassy representative David Parsons, who greeted the immigrants at Ben Gurion Airport, said that support for aliyah is meant to express the relationship with the Jewish people. "The backing of aliyah is designed to allow every Jew to realize his desire to move to Israel, as part of our support for the Jewish people and the State of Israel."

Kozirov said, "The situation in France had become unbearable. There is a large Muslim community and harsh political criticism of Israel. Therefore we preferred to leave." The family lived in Paris before they arrived at Tivon. They hope to find an apartment that they can live in over the coming year.

"We have great expectations of life here," Kozirov added. "In France, my husband and I worked in hi-tech – we hope to find work in the field here.”