The United States issued a worldwide travel alert on Friday, warning US citizens about the "continued potential for terrorist attacks, particularly in the Middle East and North Africa."

In a statement, the State Department said current information suggests al-Qaeda and its affiliates continue to plan terrorist attacks in the Middle East and beyond, and may concentrate those efforts in

A US official said the alert was based on the same intelligence information that prompted US embassy closures for this Sunday. 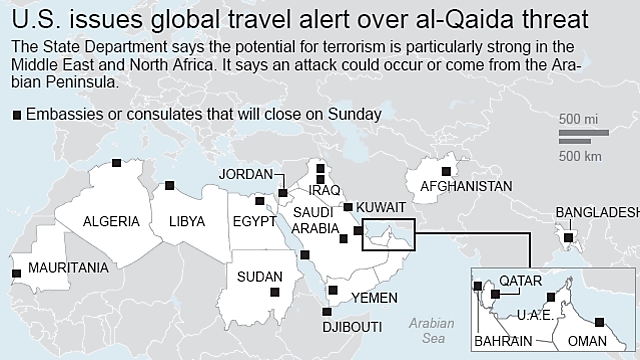 According to American sources, reliable information based on human intelligence and intercepted al-Qaeda communications in the Middle East has raised concerns of a plan to attack American targets overseas – which led to the decision to close embassies in Israel, Egypt and in 12 other locations.

The information mentioned a date but not an exact target, but in light of the deadly attack on the American consulate in Benghazi, Libya, where the ambassador and three other Americans were killed, the US administration is acting with extra care.

Meanwhile, US President Barack Obama has ordered that "all appropriate steps" be taken to protect Americans in response to a threat of an al-Qaeda attack, a White House official said Friday.

"The president is being updated on a potential threat occurring in or emanating from the Arabian Peninsula," the official said on condition of anonymity.

According to the intelligence source, the most threatened embassies are those in Tel Aviv, Cairo, Baghdad, Riyad, Kuwait City and Bahrain.

The timing is most likely related to the end of Ramadan – not to President Barack Obama's birthday on Sunday.

The warning said al-Qaeda or its allies might target either US government or private American interests. The alert expires on Aug. 31.

The New York Times reported Friday night that American officials said the US had intercepted electronic communications among senior operatives of al-Qaeda.

US officials pointed specifically to Yemen, the home of al-Qaeda's most dangerous offshoot and the network blamed for several notable terrorist plots on the United States.

"Current information suggests that al-Qaeda and affiliated organizations continue to plan terrorist attacks both in the region and beyond, and that they may focus efforts to conduct attacks in the period between now and the end of August," a department statement said.

The biggest question for the American administration is whether to keep the closure after Sunday. The State Department admitted that it embassies may be closed for additional days.

Without further information, some are concerned that the US will announce the closure of all its 84 embassies worldwide. NBC reported that the Americans are working together with other countries intelligence services to minimize the number of closed embassies.

Michael Leiter, former head of the National Counterterrorism Center, said that this is a rare move, which points at the reliability of the intelligence at the State Department's disposal.

According to him, usually between 40 and 50 threats are received a day, both in the US and abroad, against American targets.

Earlier on Friday, the US State Department announced 12 of its Middle East and north African embassies will be closed on Sunday because of security concerns.

“There is a significant threat stream and we’re reacting to it,” Joint Chiefs of Staff Chairman Gen. Martin Dempsey told ABC News, describing the threat as “more specific” than previous threats.

Yitzhak Benhorin, the Associated Press and AFP contributed to this report