Show of force in Dahiya: On Saturday, one month after the explosion of a car bomb in Hezbollah’s stronghold in Beirut's southern suburb, the Lebanese television channel Al-Jadeed provided a glimpse into preparations taken by the organization following the blast, in which dozens were injured. The story was broadcast one day after the general address of Hezbollah Secretary-General Hassan Nasrallah, in which he emphasized to ardent supporters that it was in the Arab world’s best interests that Israel disappear from the face of the Middle East.

The station’s reporter explained at the beginning of the story that he was standing at the scene of the blast. "This destruction is similar to the destruction of the Second Lebanon War,” he said. “But here in the parking lot in Bir al-Abed where a car bomb exploded one month ago, there are no Israeli fingerprints, this was revealed by the investigation of Hezbollah and Lebanese security forces." The reporter added that following this conclusion, many questions were raised regarding the identity of the persons behind the blast, "How did those behind this dare to play the game of death with Hezbollah?”

While covering the story, the correspondent shows Hezbollah personnel in the southern suburb walking around during the daytime hours with sniffer dogs, searching for explosives in cars and on the streets of Dahiya. "This game of death led Hezbollah to raise its alert to record levels," the correspondent said, adding that no one in the southern suburb of Beirut was ashamed that it had become a "Hezbollah state," and members of the organization were even proud of the fact.

When the sun set, the reporter said, the level of preparedness of Hezbollah in the southern suburb rose even further and the security measures taken at night were different from those during the day. According to the reporter, any stranger who entered the southern suburb of Beirut became immediately suspicious to Hezbollah personnel, until proven otherwise. During the night tour presented in the article, Hezbollah members examine people in cars and the contents of vehicles, as well as trucks coming into the area. 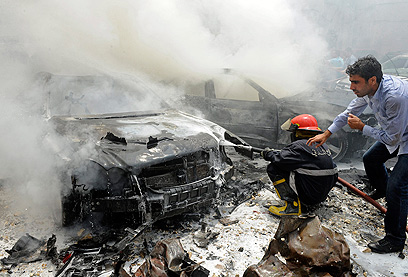 As mentioned, the story aired the day after the Friday World Jerusalem Day ceremony held by the Hezbollah, in which Nasrallah delivered a combative diatribe against Israel. "He who stands against the Zionist entity protects Palestine and the future of his children and grandchildren," Nasrallah said passionately.

Later that evening, the former Lebanese prime minister and chairman of Al-Mustaqba, Saad al-Hariri, replied to Nasrallah in a special speech from Jeddah. In it he said that Hezbollah had lost its power in the struggle against Israel, since it was using its arms against the Syrian people, and not Israel. His remarks joined the statement a day earlier of Lebanese President Michel Suleiman, who made it clear that in light of Hezbollah's fighting in Syria, the group’s arsenal should be under the control of the state.

A month ago, Hezbollah Parliament members were quick to blame Israel for involvement in a suicide bombing in the southern suburb of Beirut. At the same time, groups affiliated with Syrian rebels claimed responsibility, but the Free Syrian Army which is fighting the regime of Bashar Assad said it had no connection to the incident.